Exhibition includes work relating to U2, Enya and Cranberries, Royal Blood and The Kills 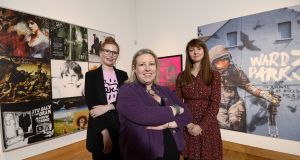 Original artwork for some of Ireland’s greatest album covers is to go on display from Friday at the Ulster Museum in south Belfast.

Overtones: Irish Music Art will complement a touring exhibition, The Art of Selling Songs: Music Graphics from the V&A, which includes album covers, sleeve notes, programmes and posters from the 19th century to today.

The free touring exhibition is on loan from the Victoria and Albert Museum, London. The Ulster Museum has also curated an Irish section showcasing the visuals of Irish bands from the 1960s to the present day, including Colin Davidson’s Rhythm and Repose portrait of Glen Hansard, and record sleeves of U2, Enya, The Cranberries, The Pogues and Snow Patrol.

They will be displayed alongside late-1800s ads of French and British live “smoking concerts”, rare record sleeves for artists such as Louis Armstrong and Blue Mitchell right through to the complex sleeves designed by Peter Blake and Jann Haworth for the Beatles album Sgt Pepper’s Lonely Hearts Club Band.

Senior curator of Art at National Museums NI, Kim Mawhinney, said: “From the 1960s to the 1980s there was an explosion in iconic music imagery, from psychedelic graphics to punk collages and sleek postmodernist looks. These rich and imaginative visuals were often produced by star designers attached to record companies.”

She added: “There are album covers here that the general public will see and recognise but what will be most striking are the most recent additions, including the 2014 artwork for Royal Blood’s eponymous album and the 2016 record sleeve for Ash & Ice by The Kills.”

The exhibition’s curator, Riikka Kuittinen, said: “This exhibition arrives at a moment when the digital revolution reaches full maturity, and music and visuals filter through screens like everything else.

The exhibition runs June 14th-September 15th and will be accompanied by a series of Saturday workshops and gallery talks. nmni.com