Finghin Collins takes a lap of honour on his 40th birthday 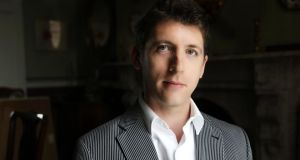 National Concert Hall honour a kind of official seal on the perception of Finghin Collins as the leading Irish musician of his generation. Photograph: Frances Marshall

Finghin Collins will turn 40 at the end of the month, and the National Concert Hall got its congratulations in early by presenting the pianist in a solo recital as part of its current International Concert Series last Thursday.

It’s an unusual honour for the hall to bestow, a kind of official seal on the perception of Collins as the leading Irish musician of his generation. This singling out may not be entirely fair to his contemporaries, but it is entirely representative of the way he is viewed by the Irish public.

Back in the early 1990s, Collins carved out an identity for himself as a special kind of prodigy. I remember one of his teenage concerto performances in which he effectively wrested control from the conductor whenever he wanted to guarantee that the orchestra would follow exactly where he was going to go.

There was nothing dramatic about the exercise of power. He simply did what was necessary, as if it was the most natural thing in the world. It came as no surprise that he would later dip his toe into the world of conducting, and he still likes to direct Mozart concertos from the keyboard.

When he was young, that ability to take control of the situation did actually mar some of his ventures into chamber music, when he exercised his assertiveness to the detriment of other players and the music. But he has mellowed in the area of give and take, and has a thriving career as a chamber musician, not just at home – where he is artistic director of both Music for Galway and the New Ross Piano Festival – but also abroad.

In the new century, that badge of honour opened up international opportunities – engagements with major orchestras and in major venues on both sides of the Atlantic, including two appearances at the BBC Proms in London – and saw him spend a three-year term as associate artist of the RTÉ National Symphony Orchestra, during which he performed a complete cycle of the Mozart piano concertos.

Musically, Collins is what you might call a centralist. There’s a warm-hearted, musically intelligent, and tonally agreeable unflappability to his style that ensures that in core repertoire he almost never comes up short. And that applies in demanding pieces that a lot of Irish players still fight shy of, Barry Douglas being the most obvious exception.

His musical taste appears to be conservative, so you’re unlikely to find him taking on the kind of works by Thomas Adès and Gerald Barry that Hugh Tinney is willing to embrace. But that’s not to suggest that he steers clear of contemporary music. In New Ross he has commissioned and been involved in the first performances of works celebrating the Ros Tapestry. And contemporary music is part of the offering in Galway, too.

Last week’s concert found him concentrating on tried and trusted favourites from the 18th and 19th centuries. His playing of Bach’s Partita No 1 in B flat, BWV825 was pleasingly clean and clear, with moments of sensitive embellishment in repeats.

He ended with more of a storm, Chopin’s Polonaise-Fantaisie, and when the audience demanded more, his responses included the always mysterious Mazurka in A minor, Op 17 No 4, a piece of timeless, wistful musing that he delivered with a sense of aching beauty.

The RTÉ National Symphony Orchestra’s programme the following night marked the centenary of the death of Brian Boydell with his most-played piece, In Memoriam Mahatma Gandhi. Visiting conductor Claus-Peter Flor took a larger-than-life approach that sometimes inflated the music beyond its native expressive range, as if volume of sound had a direct connection with intensity of expression.

Russian pianist Denis Kozhukhin was unfazed by the challenges of Rachmaninov’s Fourth Piano Concerto, but did not manage to make the piece sound like anything more than a rehashing of ideas the composer had expressed better in earlier works. He was altogether more impressive in the searingly intense lament of Alfred Schnittke’s Piano Quintet, given a rewarding late-night performance with the RTÉ Contempo Quartet.

Flor’s inflating tendencies were also on show in Dvorak’s Eighth Symphony. The dynamic range of the performance was huge, with most of the most effective moments secured in the lower end of the range. It was good, however, to be reminded of aspects of the RTÉ NSO’s sound potential that other conductors so rarely choose to exploit.

The misunderstood, useless and brilliant artists of the Irish diaspora
6