One to arrive early for, one nobody knows about, and one everyone will stay up for 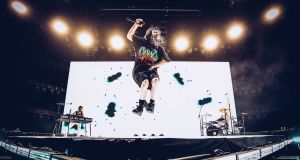 All eyes will be on Billie Eilish’s debut Irish open-air performance, and for good reason. In no time at all the California teenager (whose surname is O’Connell, so there’s a definite Irish connection) has become one of the most talked about pop singers in years. A little bit Lana Del Ray, a little bit R&B, a little bit goth-nihilism – fancy a jolt to the system?

Yes, he appeared at 2018’s EP as a guest of Mavis Staples, but this year Hozier, justifiably, has his own headlining slot. The most mainstream main-stage act across the weekend, the Co Wicklow man has enough hit songs across his two bestselling albums to make sure the audience will be eating out of his hands. Take Me to Church? Let Hozier be your host.

If Hozier isn’t your thing ... This UK-Russian singer-songwriter now has two vastly underrated albums out there – 206’s Nothing’s Real and the recently released Forevher. What makes Shura a must-see is her perfectly pitched, lyrically intimate electro-pop, which eases its way from hummable to immersive in a matter of minutes. We are hoping the tenderness of the music is matched by the venue she is performing in.

There are settlers and pioneers, and by God in the context of Irish hip hop Scary Éire were the latter. The four-piece formed in 1990, delivered some riotous gigs in the likes of Dublin venues Fibber Magees and Barnstormers, signed to Island Records, recorded an album that wasn’t officially released, and then quietly dissolved. To say Scary Éire have been a potent influence on today’s much more coordinated Irish hip-hop music is a huge understatement, so to see them back – even if it’s for just a one-off EP gig – is something of an event.