We are witnessing the slow unravelling of Kanye West 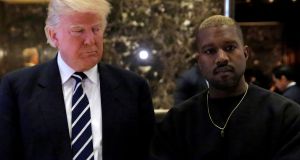 This just in from the department of Make America Read Again: Kanye West says slavery is a choice.

“When you hear about slavery for 400 years . . . For 400 years? That sounds like a choice,” he said in an interview with TMZ that dissolved into a confrontation with a justifiably outraged reporter.

Later, on Twitter – to which he returned two weeks ago, after a year-long absence, and where his feed resembles the self-help-style musings of an alt-right bot on acid – he explained he was simply promoting “free thought”.

“The reason why I brought up the 400 years point is because we can’t be mentally imprisoned for another 400 years. We need free thought now. Even the statement was an example of free thought It was just an idea,” he said, effectively demonstrating in a single tweet the urgent need for schools to keep teaching both history and punctuation.

The slavery outburst is merely the latest example of Kanye’s increasingly unhinged behaviour, which he passes off as independent thought. Free thought, in ‘Ye’s world, is a rallying cry, a political slogan and defence for everything: from supporting Trump, to never using capital letters, to comparing himself to 19th-century abolitionist Harriet Tubman. (Although even Kanye’s freedom has its limits – he was forced to tweet a clarification that he doesn’t agree with everything Trump does after an irate phonecall from his wife, Kim Kardashian-West.)

In the spirit of free thinking, here’s a free thought: we are witnessing the slow unravelling of Kanye.

the reason why I brought up the 400 years point is because we can't be mentally imprisoned for another 400 years. We need free thought now. Even the statement was an example of free thought It was just an idea

once again I am being attacked for presenting new ideas

You don't have to agree with trump but the mob can't make me not love him. We are both dragon energy. He is my brother. I love everyone. I don't agree with everything anyone does. That's what makes us individuals. And we have the right to independent thought.

He has always been an odd mix: an iconoclast and a bombast, a master media manipulator, an oversharer and an overexplainer, obsessed with celebrity, fixated on notions of his own brilliance, notoriously oversensitive, and not nearly as profound a thinker as he seems to believe. Yep, it’s no wonder he’s drawn to Trump.

But lately he also doesn’t seem to be entirely right in himself. There’s the well-documented stuff – his public struggle since his mother’s death in 2007; his admission to a psychiatric hospital suffering from opioid addiction after he had liposuction; his renewed obsession with Twitter, where he posts 20 tweets an hour and his persona pings wildly back and forth from genre-busting rapper, to spiritual leader of the masses, to mid-level manager leading a productivity workshop.

(“Try to avoid repetition do meetings in different places and at different times than the normal break the normal,” he tweeted wisely last week in a break from his Messianic mutterings.)

In all his glorious insanity and amazing self-belief, Kanye is the ideal emblem of our age. He is the perfect spiritual leader for a generation brought up to communicate in 280 characters, since he himself rarely sees the need to think beyond 280 characters. Or at all. Feelings are the currency in which he trades (well that and gold, and quite a lot of Bitcoin, apparently).

Who needs facts – or robust, well-researched opinions, or even fully articulated thoughts – when you are blessed with an endless capacity for stringing words together in sentiments that might look vaguely meaningful in a tweet or on a T-shirt, if you don’t look at them for too long? (Maybe not an entirely endless capacity, if the lyrics of the song he released at the weekend are anything to go by. In Lift Yourself, he responds to questioning of his recent right-curious and Trump-loving tweets with the devastating putdown: “Poopy-di scoop / Scoop-diddy-whoop / Whoop-di-scoop-di-poop / Poop-di-scoopty.” )

His only consistent value – and this is yet another thing he has in common with his “bro in dragon fire” Trump – is a resistance to anything he classifies as political correctness.

Challenged in the TMZ interview about what he was trying to say when he posted a selfie in a MAGA hat, he said: “It was really just my subconscious. It was a feeling I had.” It was mostly about “doing something that everybody tells you not to do”, he added.

Kanye likes to keep his fans guessing, but there’s already speculation as to what his next incarnation might be. Stephen Colbert had one suggestion this week, and I think it might just work, the latest glorious gasp of an America sieged by collective insanity. “I think Kanye is lobbying for a job as Trump’s new communications director. He could just change his name to Kellyanne Kanye.”

I suspect Ye has his sights set on a different White House job. The real reason that he loves Trump is not because of his policies, or his unapologetic crassness, but because of what he represents – the possibility that anyone, if they’re rich enough and provocative enough and willing to tweet often enough and maniacally enough, can become president.

He said as much in an interview with fellow rapper TI, when he said he admired “the ability to do what no one said you can do, to do the impossible”.