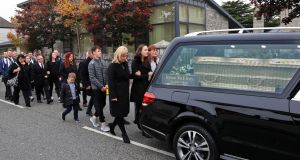 The cortege makes its way to the church followed by family and friends at the funeral of Eamonn Campbell. Photograph: Colin Keegan/Collins Dublin

A lone piper playing The Foggy Dew led the cortege into the grounds of St Agnes’s Church in Crumlin, Dublin, for the funeral Mass of musician Eamonn Campbell yesterday. The former member of The Dubliners died last week in the Netherlands after falling ill while on tour.

The coffin was carried into the church by a quartet of All-Ireland-winning Dublin stars: Philly McMahon, Kevin McManamon, Denis Bastick and Eoghan O’Gara. The Sam Maguire Cup was placed on top of it for the Mass, celebrated by former parish priest of St Agnes’s Msgr John Deasy, and Fr Brian D’Arcy.

Msgr Deasy told the congregation that the Drogheda-born musician had been a great follower of Dublin GAA. “He probably realised Louth never had a hope of winning the All-Ireland,” he said, to widespread laughter.

Among the gifts brought up by Campbell’s grandchildren to celebrate his life were a guitar and a copy of his favourite newspaper, The Irish Times.

The congregation – which included his fellow band members Paddy Reilly, Patsy Watchorn and Sean Cannon, along with impresario Oliver Barry, comedian Sil Fox and economist Colm McCarthy – heard that the musician got his first guitar when he was 11 and had taught himself how to play.

He had his first gig at 14 and never looked back. “He has gone to join the choir of angels,” said Msgr Deasy. “He’ll be playing the mandolin and the guitar and keeping the angels busy.”

Speaking on behalf of the family, Campbell’s daughter Ciara said her father’s life had taken a turn at the age of 10, when he heard Elvis Presley’s That’s All Right for the first time.

Several years later, in 1964, he left school with the intention of becoming an accountant. “But his accountant’s brain told him he’d make much more money out of gigging,” she said. He would go on to play for bands such as The Viceroys, The Checkmates and The Delta Showband.

His close association with The Dubliners began when he produced their anniversary album in 1986, and he went on to join the group the next year. “His favourite saying was ‘They won’t stop me singing till they put me in the ground’.”

She recalled his deep love for his wife, Noreen, their five children and grandchildren, and how he spent several Christmas Days singing at the dinner for the homeless in the RDS.

She also remembered how in a pub session once he dealt with a “headwrecker” playing his most hated instrument – the spoons – by “accidentally” swinging the neck of his guitar around so the offending items ended up in someone’s pint.

There was music throughout the service, with Imelda May taking lead vocals on songs including Will the Circle Be Unbroken? and Pete St John’s Dublin in the Rare Ould Times.