Drawn to music: The eye and ear of illustrator David Rooney

What are the lines that connect a visual artist with the medium of sound? 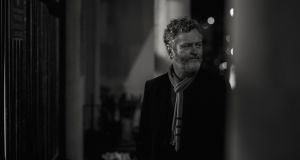 Jet-black darkness rolls down off the Sugarloaf. Some inky Wicklow noir drenches a visual artist and musician who lives in a small clutch of cottages by the foothills. Crouched inside, a scalpel in his hand, he casts a short-bearded silhouette on a wall to which an acoustic guitar has been nailed. To specify his location, he references Bray, the N11, the road to Glendalough. “It’s the last light on the way out to the country… It’s rural.”

David Rooney applies that scalpel to scraperboards – he has always earned a living from his etchings. His work is dark and cinematic, often freezing moments in some socioeconomic narrative such as Ireland’s trajectory towards peak boom. Light appears to shine in on his surfaces as though through chinks in the world’s template or pinholes in some lens. Each image is predominantly black but lit selectively like some overworked film script storyboard. They are rendered with a knife – he scrapes them out to stark effect.

Rooney’s work has graced books, stamps and BBC and History Channel programmes. He is probably best-known for the Royal Irish Academy-published 1916 Portraits and Lives project, which toured around the world – it consisted of 40 images and the State's Office of Public Works purchased them afterwards. For 12 fruitful years, the Irish Times finance section afforded him a weekly visual column: until 2008, his work penetrated the pumped-up financialism of the period, his lacerating stills nailing a corporate world of industry captains too often treated toothlessly elsewhere.

But the visual artistry was no longer enough. He wanted music too. For years, he had messed around with an acoustic guitar and Hank Williams cover versions, playing occasionally in bars with pals. “I had a yearning to write songs but I hadn’t worked out where they could come from. I had no idea they could come from the same well as the art.”

Sometime around 2014, he found himself at a party for the guy Pete who used to sell In Dublin outside Bewley’s. A celebrated former street busker was there too, playing the bones of new tunes for his friends. Rooney had a flash of insight: “I recognised in his unfinished songs a pencil drawing for an idea. I recognised the process. Songs are exactly the same as drawings. If you don’t think about it too much, you will have something.”

The circular economy of creativity led to him gifting an illustration to Declan O’Rourke. Handing it over to the Galileo singer, he let slip he had written a song or two. “Oh you have, have you?” said O’Rourke, poised to throw his eyes up to heaven. “Sing me them now so.” Rooney took a deep breath and let him have it. Result: O’Rourke offered to do a demo tape for him – right there and right then. Over the next five hours, they recorded until dawn: “It was a road to Damascus. He gave me the confidence to sing and feel my songs. We worked out a barter system whereby I did an album cover and some singles for him and he produced my album.”

Recorded in four days with jazz drummer Conor Guilfoyle, bassist Baz Rycraft, Palestinian singer Ruba Shamshoum and keyboard player Jay Wilson, Bound Together came out in 2017. It is a sweet-sounding, optimistic collection of 10 songs exuding an alarming musical maturity. Rather than the amateur twangs of an angst-riddled novice, it offers a lush middle-of-the-road feel.

“It was a huge learning curve,” says Rooney. “But in retrospect what I ended up with was something made by someone else. I didn’t recognise myself in it in terms of my work as an artist. But the songs had a jazzy feel and suited that musical line-up.”

A subsequent gig above Cornelscourt’s Magic Carpet drew a theatre-type audience. Rooney told polite anecdotes between each song. As an interlude, he asked Jay to play a piece by Bach. This he did magnificently. Torsten Kinsella (of God Is an Astronaut) and musical artist Stano were in the audience. They both knew Rooney’s illustrations. “They said afterwards to me ‘You’ve a good way with a hook. But we can’t connect these songs to the person who makes your art.’”

Rooney is as affable as his artwork is dark. His personality is easier to connect with his “nice” songs than with his complex illustrations. Troubled by the difference between his musical and visual output, he has worked with Torsten to align his music more closely with his art. “The very niceness of the music was the enemy of its aesthetic quality. The enemy of what I was trying to do was this tendency to make the songs nice. That middle-of-the-road music appealing to a vaguely jazz-aware audience can seem terribly bland. People can’t be going ‘is that really the guy who does those illustrations?’”

As a producer and collaborator, Torsten whipped him into shape. Ruthlessly he rejected Rooney’s new material. “The weakest thing is your voice, he told me. Focus on instrumentals and they will feed off your art much easier.”

Rooney was reborn. Echotal is the flag under which he now sails with Jay Wilson. He has just released their first new project – one track a week over the last month, each of the four musical pieces accompanied by an atmospheric video. The overall sound is cinematic and ambient, a world away from his earlier work. The first track, Melting Ice, is an instrumental textured by celloist Jo Quail with building guitar work which reminds of The Durutti Column. There is a subtle tension to it that unfolds. Track two, Endless (mixed by Snow Ghosts), is a sparse choral work of shifting repetition, vocal fragments and an internal thud not a million miles away from some twisted take on Enya. Track three is Glencoe, a melancholic guitar dialogue whose animated video tells the tale of a massacre in Scotland in 1692. Hiding completes the quartet, with Rooney singing a subtle melody and ending on a wildtrack recording of a Wicklow storm.

“Time is precious – what you do should be part of a body of work rather than an exercise in doing something for diversion. Music really captures me: the only time it came close with the illustrations was when I did 100 of them for the BBC series The Story of Ireland. One every day for three months. And there was a series I did on the Famine which really affected me. I could feel the eviction, I could sense the rotting potatoes and desperation. But with the music this happens all the time: I am completely moved by it. Jay can play the piano for me or when I hear Jo Quail’s cello… It’s as if I have started a picture and they have come along and populated it with people I haven’t drawn but it is like they have always been there.

“These new pieces are pictures in my head but they became music. My music now creates visuals for me.”

Irish Times illustrations (1996-2008): Dark economics
“My work wouldn’t be dark but for the dark circumstances of the era I turned up to be drawing pictures in. It couldn’t have been better for a young angry man coming from the west of Ireland – there was the church, the State and the Troubles. I did the Irish Times business illustration every week for over a decade up to 2008. The crash would have been far better to illustrate. I should really have been documenting the fall of those figures. During the boom, I was selling two out of four of my original illustrations privately every month – to the people criticised. Banks were buying them whenever one of the other banks was shown in a bad light. After I did the illustration for Thursday night for the Friday edition, I would call into D’Olier Street and pick up the paper. I’d go across to Bowes and have a pint on my own. They were the most precious artistic experiences I have ever had.”

Hot Press: Illustrator for a columnist who became the President
“In the International Bar downstairs on a Friday night there could be Michael D Higgins (back from El Salvador and spitting fire), Eamonn McCann, Declan Lynch, Liam Mackey, Liam Fay – all amazing people. If I got one word in with any humour or gravitas I would be thrilled… but my drawings were as good as anything they were saying. It was satisfying to know you were competing visually with what intellectually was going on. I was just 24 when I started in 1986.”