Ross describes Jackson as ‘a magnificent incredible force’, following allegations of child sexual abuse against him 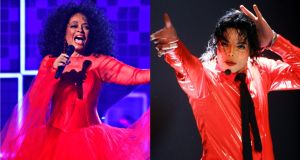 Stop in the name of love... Diana Ross and Michael Jackson

Diana Ross has voiced support for Michael Jackson in the wake of the explosive Leaving Neverland documentary, which features extensive allegations of child sexual abuse by Jackson.

Ross, who dueted live with Jackson and knew him for many years, wrote on Twitter: “This is what’s on my heart this morning. I believe and trust that Michael Jackson was and is a magnificent incredible force to me and to many others.” She called on people to stop the criticism of Jackson, writing “Stop in the name of love”, a reference to the title of one of her biggest hits with the Supremes.

Her comments come in the wake of comments by actor Barbra Streisand, who has also voiced support for Jackson. “[His] sexual needs were his sexual needs, coming from whatever childhood he has or whatever DNA he has,” she said in an interview. “You can say ‘molested’, but those children, as you heard say, they were thrilled to be there. They both married and they both have children, so it didn’t kill them.”

Following a backlash, Streisand clarified her comments in a statement. “To be crystal clear, there is no situation or circumstance where it is OK for the innocence of children to be taken advantage of by anyone,” she said, adding that she felt “nothing but sympathy” for Jackson’s alleged victims.

In Leaving Neverland, Jackson is accused by Wade Robson and James Safechuck of years of sexual abuse when they were children. As well as seriously damaging Jackson’s legacy, the allegations – which Jackson’s family deny – have led Louis Vuitton to drop a range of Jackson-themed clothing, and a biographical musical, Don’t Stop Til You Get Enough, to be put on hold.

Ross and Streisand are far from the only fans to defend him, though. A crowdfunded advertising campaign that asserted Jackson’s innocence was hosted on London buses, before being removed due to “public sensitivity”. Meanwhile, fan group The Michael Jackson Community is suing Robson and Safechuck over their accusations. – Guardian

Covid-19 has proved worse than the film-makers imagined
8