In 2007, 25 years old and already burnt out, Britney Spears was having a very public meltdown. But amid the chaos of her personal life, she came up with her best album 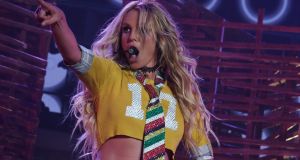 You want a piece of me? Britney Spears performing her residency show at Planet Hollywood in Las Vegas, which has grossed $121 million since it opened in 2013. Photograph: Marco Piraccini/Getty Images

On October 25th, 2007, Britney Spears released the best album of her career. But the thing that most people will remember about Britney Spears in 2007 was that she became an unstoppable car crash.

Amid the chaos of her private life, which spilled out on to the streets and car parks of Los Angeles around which she drove aimlessly at night – she somehow recorded the aptly-titled Blackout. But by the time of its release, Spears was in full meltdown mode.

In February of that year, photos had circulated of her beaming in a barber shop while shearing off her own locks. That manic grin was reduced to a snarl days later, as America’s completely unrecognisable pop princess attacked a paparazzo with an umbrella. At the time, she was also in the middle of a custody battle for her two sons.

In the build-up to the release of Blackout, we sat at our laptops and consumed celebrity culture in a way we never had before. Even though Bebo and MySpace had been well established, social media was taking on a new lease of life. In 2006, Facebook became open to the public, so anyone over the age of 13 could have a profile; and, in 2007, 20 million people did.

As we scrolled through poorly phrased statuses on Facebook, we had Perez Hilton’s TMZ celebrity gossip website open in a different tab. On Hilton’s site in particular, Britney’s gradual yet destructive breakdown was played out like a sitcom on our screens. On television, a little reality show called Keeping Up with the Kardashians first went on air on October 14th.

The status of “icon” had been considerably downgraded, but we lapped it up at the same rate.

Britney Spears is part of the last generation of old-fashioned megastars, along with Beyonce and Justin Timberlake, meaning that we only saw them how they wanted to be seen: on magazine covers and on scheduled TV interviews. But it was Spears’s star that imploded because of this cultural shift.

Blackout was her first album since 2003’s clubbier-sounding In The Zone. In that time off, she got married twice. Marriage number one, to Jason Alexander, lasted 55 hours (it was later annulled), and her second marriage was to back-up dancer Kevin Federline. By the age of 25, Spears was divorced and had two babies under the age of two with Federline.

Looking back, it’s easy to read that as a giant red flag, on fire in a fireworks factory, but in 2007, with the ever-increasing rise of Amy Winehouse and the visible emaciation of Lindsay Lohan and Nicole Richie on red carpets, self-destruction was en vogue.

As rumours of Spears’s all-night partying and drug abuse appeared to be endorsed by the images we saw online, a “comeback” performance at the VMAs in September 2007 proved what many fans thought: her career was over.

She slumped her way through a performance of Gimme More, sadly miming “They want more? Well, I’ll give them more” in a thinly-veiled threat.

Although her life was falling apart, Britney took full charge as the executive producer on Blackout, and the musical risks she took paid off. She enlisted Bloodshy & Avant, Danja, Keri Hilson and The Neptunes to create edgy pop with an R&B sound, with the result that Blackout became the older cousin with a bad reputation to the toothy, bubblegum pop she first released in 1998.

Mixing in elements of gritty dubstep on Freakshow and electro-pop on Heaven on Earth, her voice was stretched, layered and manipulated to create twisted new sounds. Her famous Louisiana drawl is hyped up to create a demented, cartoonish effect on Toy Soldier and Hot as Ice.

In the studio, she could push boundaries but, once she stepped outside, she was trapped by paparazzi, eager for their next snapshot of a fallen star.

Weeks before Blackout’s release, I remember sitting in my college accommodation with my laptop hooked up to an ethernet cable (it was the only way), waiting for Piece of Me, her second single from the Blackout era, to download via Limewire (I’m so sorry, Britney).  And, as the manipulated electro-squawk opened the song, after years of being hounded by the media, Spears answered back. “I’m Miss American Dream since I was 17 . . .”

“If Britney survived 2007, you can survive this week” has become a motivational meme quote, but she just about survived.

By February 2008, Spears would be hospitalised three times, once under a section 5150, an involuntary psychiatric hold – we almost instantly saw the videos and photos of her strapped in a gurney as she was loaded into an ambulance. This was what celebrity culture meant in 2007.

In November 2008, she released Circus, along with the MTV documentary Britney: For the Record.

“Do I know my life is weird? It’s all I’ve ever known. I don’t see it as being weird . . . I’m kind of stuck in this place and I’m like, ‘How do you deal?’ I just cope with it every day,” she says to the camera, in a moment of brutal honesty. “It’s better not to feel anything at all and have hope than to feel the other way. It’s bad. I’m sad.”

Spears has spent the majority of her career trying to shed the virginal yet highly sexualised image that was created by a marketing team when she was just 17. But in an attempt to regain control of her life as an adult, she lost it all.

Now at the age of 35, Spears appears to be happy. Since 2013, she’s had a residency in Las Vegas’s Planet Hollywood called Britney: Piece of Me. She performs 50 shows a year but, before and after the show, she gets to play mom and, if her Instagram is anything to go by, she spends the rest of her time doing yoga and painting flowers while listening to Mozart. By cutting touring out of her lifestyle, she can split her time between Las Vegas during the show’s run and going home to California to spend time with her family. The days of going out on the tear are long gone.

Piece of Me has grossed more than $121 million so far, making it one of the strip’s most successful shows. Although the show is coming to a close on New Year’s Eve, another one of her side projects is going strong.

Spears is one of the best-selling celebrity perfumers in the world. She has 22 different scents in her perfume range, with titles such as Fantasy, Believe and Curious, and she has sold almost 175 million fragrances worldwide. To compare, RCA Records reports that since 1998, she has sold nearly 100 million records worldwide.

Yet despite her recent stability, she didn’t emerge from the car crash of 2007 unscathed. Her father, Jamie Spears, still has total control of her finances as her legal conservator. This means that Britney, among many other things, cannot own a credit card, and her father oversees all of her contractual negotiations.

Blackout holds a cult status among her fans. It’s what Ray of Light is to Madonna fans, and, 10 years later, it’s still her strongest album. Whatever control she needed, she found it in her music – the only part of her she was willing to share – and we bit off more than we could chew.

Through the lyrics and imagery of her best singles, it’s like she was trying to tell us something all along.

Lucky (August 2000) Taken from  her second album, Oops! I Did It Again, this song is practically prophetic. It is a story about a girl named Lucky, an actress who has all the awards, the fame and fans, but still cries herself to sleep at night.

Stronger (November 2000) Picking up from . . . Baby One More Time’s “my loneliness is killing me”, Stronger, also from Oops! I Did It Again, declares that her “loneliness ain’t killing me no more”.

Overprotected (December 2001) This was like a warning sign. Released when she was 20 years old, she is spelling it out, or rather, songwriter Max Martin is spelling out the fact that her management needed to loosen the reins.

Everytime (May 2004) She wrote Everytime, her saddest song, in the aftermath of her relationship with Justin Timberlake. The video sees her being hounded by photographers and later drowning in a hotel bathtub. Christ.

Piece of Me (November 2007) “I’m Mrs ‘You want a piece of me?’/ Trying and pissing me off/ well, get in line with the paparazzi/ who’s flipping me off.” It’s fair to say she’s had enough of your bullshit.

Circus (December 2008) Placing herself in the role of the ringmaster, Britney calls out the media once again in this single and album of the same name.