Getting to know you: From Billie Holiday to the airport blues 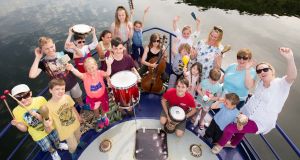 If you hadn’t become a musician, what career might you have followed?
Well, I like eating and I like travelling. So some kind of cross between a food critic and a travel journalist. Something along those lines. Definitely the food critic part.

Your musical hero/heroine?
All of my teachers have had a very big impact, especially Adrian Petcu in Cork. He’s more of a mentor than a teacher. He’s always there for me, even now. Also my teacher in Germany, Mihaela Martin. And I really love English cellist Steven Isserlis. Growing up, listening to the Vanbrugh Quartet in Cork, I was influenced by them. I play trad as well, so that has given me a slightly different, more open outlook on music.

What are you most looking forward to in Bantry?
I grew up going to Bantry. I did the master classes a few times, I was back last year, and again this year. It’s just a fantastic place. I think what makes it special is the combination of the location, the musicians, and Francis - Francis Humphrys, the festival’s director - seems to have a knack for choosing musicians who are also lovely people. It’s a nice work atmosphere.

Musically, what sets your teeth on edge?
Anything that’s not genuine. When people are more interested in fame than the music, I find that difficult to understand.

Your idea of musical bliss?
The Schubert Quintet, maybe. It’s really incredible. Or any kind of situation where there’s a real musical understanding between people.

Your non-musical heaven?
Good food with good company, ideally in a nice place, in the sun, by the sea.

Your non-musical hell?
I don’t know. Probably waiting somewhere. I hate waiting, stuck in a traffic jam, things like that.

Something about you that we mightn’t know?
I sometimes have dreams about people I haven’t seen for a while, just before I meet them. Very rarely, but it has happened.

Other career?
I have no idea. I always just wanted to play music. I suppose there’s the artistic planning area of music. And I’ve always loved literature and the other arts. So, maybe something more academic.

Musical hero/heroine?
The American violinist Ruggiero Ricci was a really important person to me when I was a teenager. But there have been so many amazing people, and I’ve heard so many amazing concert. Also Hungarian violinist András Keller, leader of the Keller Quartet, is another who really shaped my musical thinking. I’m also a huge fan of singers like Billie Holiday. I really love the expressiveness in her voice.

Looking forward to in Bantry?
I’m doing quite a mixture of things this year, which will be really fun and exciting as well as challenging, from directing an orchestra and playing in the Schubert Octet, to playing Dvorak with Julius Drake and giving the Irish première of Oliver Knussen’s Reflection. Having that variety in a week is something I really relish.

What sets your teeth on edge?
Dishonest performances that are about showmanship, charades rather than really honest communication.

Musical bliss?
I would love to have been able to listen to Mozart play.

Non-musical heaven?
Just being somewhere in a beautiful landscape with friends and family and wonderful meals. Spending time with the people who mean most to me.

Non-musical hell?
Being stuck in an airport or train station forever.

Something we mightn’t know?
I love looking at things like old textiles and fabrics, for what that tells us about people’s lives and how they used to live. I love all that kind of thing.

Other career?
Good question. But for me it’s quite unthinkable not to have become a musician. But if I have to choose, I love being out in the green, in the garden, so, not a gardener, but something in nature would be great. Maybe a garden designer.

Musical hero/heroine?
I adore the human voice, so it may be a singer. Any musical voice that touches me is something I look up to. Someone like Maria Callas is very strong. And the cellist Jacqueline du Pré. She goes straight into your heart, something which I find very admirable.

Looking forward to in Bantry?
It’s really everything. I’m really looking forward to coming back after quite a few years. It’s an extremely beautiful venue, and usually an extremely well thought-through programme, one that I’m very happy to be part of. For me there are musical collaborations with new and old colleagues. For instance, I’ll be playing Beethoven trios with Barry Douglas, who I’m meeting for the first time, and Johannes Moser, with whom I’ve played before, though not in a trio.

Sets your teeth on edge?
Something that’s predictable, I think. I hate that idea. I hate easy-listening, anything that I’m not forced to listen 100 per cent to. I like to dive fully into music. If it stays on the surface, it’s not for me.

Musical bliss?
The complete opposite. Things that surprise me, something that I think is really worth listening to. It can be the classics or something that I hear for the first time but is a real discovery for me.

Non-musical heaven?
Right now it’s spending time with my family, especially with my little daughter. Any smile, any laughter from the little one gives me the greatest bliss.

Non-musical hell?
Fear is terrible, and being under too much stress, time-wise. If I think I cannot fulfil things the way I want to. That’s not hell, really. Hell would be huge.

Something we mightn’t know?
There’s hardly anything I cannot enjoy eating if it’s really well made. I’m extremely curious to try anything new when it comes to food.

Other career?
I fantasise that I would have loved to become a travel writer and write tourist guides. But I really don’t know. I was always a musician. Maybe a singer, but that’s still a musician. Then again, I would be interested in running a cheese boutique.

Musical hero/heroine?
My two cello idols are Rostropovich and Jacqueline du Pré, and among living musicians, the Turkish pianist and composer Fazil Say and the Dutch violinist Janine Jansen.

Looking forward to?
It’s my first time in Ireland, so I’m looking forward to discovering the country. And I don’t actually know any of the musicians I will be playing with, so it’s all going to be very new and exciting for that reason.

What sets your teeth on edge?
When the music-making doesn’t come from the heart. Everything which is sincerely played is beautiful.

Musical bliss?
The Schubert String Quintet, and, actually, playing Schubert in general. It really makes me happy, it’s so beautiful, so touching, so sensitive. It’s never quite clear if it’s sad or happy, and this kind of in-between emotion is something I feel all the time, too. I feel very close to him. There’s so much light and . . . I don’t know. . . it’s always magical.

Non-musical heaven?
A holiday. That’s not always very easy for musicians to get. When I have a few days holiday with my husband, it’s heaven.

Non-musical hell?
Actually, it’s musical, too. Airports. That’s what I hate most in my job.

Something we might not know
The name of my cello, which was made by Gagliano, is a grand cru classé de Graves from Bordeaux. I love wine and it’s a great story. My grandfather, Barnard Magrez, who gave me my cello, is a handler of this wine. It’s called Chateau Pape Clément and he named the cello after it.