A perfect fusion of music and location at Kilruddery 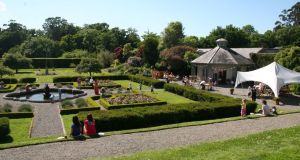 The music at Killruddery House is always given in the orangery, a special high-ceilinged conservatory for growing fruit trees 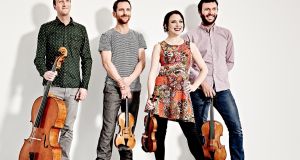 The Heath Quartet, who, with Hugh Tinney, gave compelling, engrossing performances of Bartók and Shostakovich at the Airbnb International Hub in Hanover Quay. Photograph: Kaupo Kikkas

At some point during last Thursday’s concert I found myself thinking about happiness. It was day three in this year’s Festival of Great Music in Irish Houses. Its organisers have many constituencies to keep happy over its duration: the audience, sponsors, and performers, and themselves as well.

It was my own happiness that got me started, and then wondering to what extent the ingredients giving rise to it at that precise moment were similar or different to the experience of the other constituencies around me. The ingredients for me? Above all, the music – by Mozart – was indeed “Great”. His Quintet for Piano and Winds (K 452) is wonderful: it is three movements of contrasting mood and pace, each so gracefully constructed and rich with melody, so very wide-ranging in the colours produced by the four wind instruments and piano, and so continuously primed to trigger an emotional response via sound alone, wholly independent of extra-musical reference. For me that is akin to miraculous.

The ingredient coming a close and essential second was the playing itself. It illustrated the ideal of chamber music: five independent performing spirits willingly bound to the spirit of a dead composer. Cédric Tiberghien (piano), Matthew Manning (oboe), Macdara Ó Seireadáin (clarinet), Peter Whelan (bassoon), and Alec Frank-Gemmil (horn) easefully found the magic balance between shining their brilliant individual lights and shading them when the music called for it. Without this instinctive and co-operative thinking the score’s beauty would have been compromised.

The same high-achieving calibre of collective performance characterised the final piece of the evening – Beethoven’s quintet for the same forces and in the same key from only 15 years later (Op 16) – and in much of the other music I heard during the festival.

Other ingredients included having a great friend seated next to me, and that it was one of those long, Irish, June evenings when the sun actually shone and the sky was cloudless. And the last of those ingredients was the clincher: the location. It was Killruddery House, situated on 800 acres in Wicklow since the 17th century. Other venues have come and gone, but this one has been part of the festival for all or most of its 47 years.

The extensive gardens are beautiful and the trees are mature and plentiful. The music is always given in the orangery, a special high-ceilinged conservatory for growing fruit trees. The acoustic is excellent. And the semi-panoramic views of the surrounding grounds and woods made it seem as if I was transported into the midst of one of those majestic, Romantic landscape paintings that hang in the National Gallery. I was in a painting. Listening to Mozart. In all, there were more than enough ingredients for happiness to stifle misgivings about the original, historical appropriation of lands like those at Killruddery.

You’re never supposed to speculate about the audience but it seemed that most was happy. If so, the players were likely happy, too, since pleasing an audience can be so rewarding. Furthermore, they were playing Mozart and appeared to be enjoying playing with each other. But this was the perfect fusion of music and location, the goal of the festival since it started in 1970. The organisers are nearly all the same since I first attended 22 years ago. They are dedicated and this concert must have made them happy.

Their smiles must also conceal worry. Back in 2012 this newspaper summarised how previously the festival lost its Arts Council grant due to its elite reputation: small venues with high ticket prices and an exclusive audience. It worked hard to counter that image and win back the funding, all the more important now that the festival has been without a corporate title sponsor since 2015. Making the following year’s festival a reality must occupy them constantly.

And so they wrestle with various issues – for instance, the festival’s title: only Killruddery was an actual “Irish House”, and can Philip Glass’s Third String Quartet qualify as “Great”? – and try different things.

Anyone who was happy at the end of Saturday’s midday concert in the Airbnb International Hub in Hanover Quay was happy despite delays caused by the venue’s insistence on everyone signing a full-page confidentiality agreement in order to gain admission. The audience also had to sit uncomfortably on a staircase instead of seats, and deal with an unforgiving acoustic, which allowed no resonance to the music and comprehensively exposed the players in the sonic equivalent of a goldfish bowl. It was the Heath Quartet with Hugh Tinney, and in fact they gave compelling, engrossing performances of Bartók and Shostakovich, fish-bowl notwithstanding.

The bottom line is that losing this festival would create much unhappiness, whereas helping it survive requires a constant openness to modifying the conditions in which happiness – a kind generated by the possibilities of matching music and venues – can thrive.