Classical music: What to see at this summer’s festivals 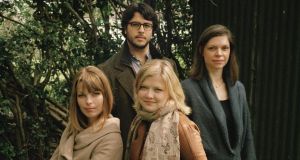 Kilkenny, where Olga Barry has succeeded Eugene Downes as festival director, is the only one where major change might have been expected. And the disbanding at the end of April of one of this year’s major acts, Nathalie Stutzmann’s period-instruments band Orfeo 55, has to have been a baptism of fire for Barry.

Stutzmann is in the middle of a hugely successful term as principal guest conductor of the RTÉ National Symphony Orchestra. Her next concert, of Dvorak and Ravel, is this coming Friday. She is also one of the world’s leading contraltos, but she has so far only been heard in Ireland as a conductor not as a singer, an omission Kilkenny set out to rectify.

The solution is reminiscent of those old-style transformations, where a company would be closed down and a new entity would carry out the same trade, with the same principals and on the same premises, just under a different name.

Orfeo 55 is no more. But the all-Bach programme will go ahead in Kilkenny on August 15th, as it will at the Elbphilharmonie in Hamburg the following Monday, where it is part of the Schleswig-Holstein Music Festival. The German festival has updated the band’s name to Orfeo friends, while Kilkenny is still advertising the defunct group, though I have been told it will perform as Phoenix 55.

Barry’s musical taste seems to be on the same lines as Eugene Downes’s but, unlike Downes, she has shied away from any overarching composer theme. Familiar names include the Irish Chamber Orchestra, Chamber Choir Ireland, Quatuor Mosaïques (three concerts), and works from Downes’s various composer explorations are peppered through the programmes.

The West Cork Chamber Music Festival in Bantry is so large and diverse that this year’s programme has 78 events over the festival’s 10 days. There are master classes, talks and public interviews as well as concerts and 110 musicians are involved.

Baroque music by women has become a feature of the festival and this year’s programme comes from Ensemble Dagda. A second all-female programme is devoted to two later figures, Louise Farrenc and Rita Strohl. Farrenc gets a further outing through her Nonet, and visiting composer, Sweden’s Andrea Tarrodi, who directs this year’s Young Composers Forum, is also well represented.

The Kilkenny festival has three works by Irish composers (David Fennessy, Deirdre McKay and Rhona Clarke) but, outside of the works from the young composers competition, Emma O’Halloran’s Dying is a Wild Night is Bantry’s sole work by an Irish composer, living or dead.

Like the West Cork Music Festival, the Great Music in Irish Houses festival has favourites that return. The opening concert brings the festival’s second appearance by veteran American pianist Richard Goode (playing Haydn, Mozart, Beethoven, Debussy and Chopin at the Royal Irish Academy). Percussionist Colin Currie returns with his quartet to play Pereira, Xenakis, Stockhausen, Volans and Reich (The Printworks, Dublin Castle). French cellist Marc Coppey, whose last festival appearance was in what may have been the festival’s smallest space, the Casino in Marino, returns for a recital with pianist Finghin Collins in Killruddery House.

Soprano Ailish Tynan returns to her native Mullingar for a programme of Mozart, Poulenc, Lekeu, Chausson, Fauré and Muriel Herbert, with Finghin Collins and the Van Kuijk Quartet. And this year’s Dublin Musical Saunter focuses on pianist and former director of the Royal Irish Academy of Music, John O’Conor. The burden of what the festival calls a “spotlight” on O’Conor features his pupils playing repertoire with which he is not much associated as a performer. He will be heard with RIAM colleagues in works by Lili Boulanger, Beethoven and Schumann.

Galway International Arts Festival may be the biggest of its kind in Ireland, but its engagement with classical music has been patchy, to say the least. In recent years it has developed a relationship with Irish National Opera and one of its predecessors, Wide Open Opera. In 2017 it presented the premiere of Donnacha Dennehy’s The Second Violinist. Last year’s programme included the first night of Emma Martin’s production of Gluck’s Orfeo ed Euridice for INO. And this year brings Least Like The Other, a new collaboration, between Belfast composer Brian Irvine and British director, designer and video designer Netia Jones.

There’s just one singing role (mezzo soprano Naomi Louisa O’Connell) in a piece which explores the tragic life of President John F Kennedy’s sister, Rosemary, whose life was ruined by a lobotomy at the age of 23, and who yet became the first of her siblings to die from natural causes. She was born in 1918 and lived until 2005.

The true history of lying
6

Classic horror: the 10 most terrifying short stories ever written
9 Sound of the soul of African Peru
10