Limited number of tickets available for previously sold out show 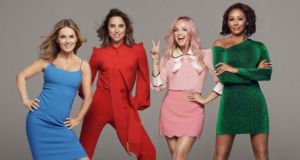 Umbrellas, alcohol, garden furniture, selfie sticks, flares, glasses or cans will not be permitted at the event.

Preparations are underway for The Spice Girls concert in Croke Park on Friday evening which organisers say will be one of the biggest shows the stadium has ever held.

The girl band, whom have not performed live together since 2012, will begin their world tour in Dublin with 75,000 people expected to attend the event.

MCD said the concert is worth €41 million to the city of Dublin with around 20 per cent of ticketholders from outside Ireland.

While the event is sold out, MCD said it has been able to release a small number of tickets now that they have “full staging and production requirements”.

“They are being released as we acquire them. It’s great news for fans that they can acquire tickets if they missed out, there are some tickets but there is a limited number,” a spokesman for MCD said.

Speaking at a press conference in Croke Park on Tuesday, MCD said The Spice Girls are the first female pop group to perform at the stadium.

Garda inspector Tony Gallagher said there will 150 gardai working at the event and a “robust policing plan” will be in place.

“We would ask fans to start arriving to the stadium early and over a period of time to allow for security checks that have to be carried out,” he said.

Strict security checks will be in operation and organisers have asked patrons not to bring bags larger than A4 size. There will be no cloakroom or storage facilities.

Umbrellas, alcohol, garden furniture, selfie sticks, flares, glasses or cans will not be permitted at the event. Gardaí have also warned to buy tickets to the show from accredited sources only.

Concert goers have also been asked to dress appropriately for the event with forecasts for sunny and showery conditions on Friday.

Eamon Fox, event controller in charge of operations said the girl band has yet to arrive in Dublin.

“This is a celebration of nostalgia in the nineties, it’s the Spice Girls into the digital age in their own words...We are the first live performance of the Spice Girls since the London 2012 Olympics Games and that was one hell of show. So we would be expecting something similar in Croke Park on Friday evening,” he added.

There is no queuing allowed prior to gates opening at 6pm. Supporting act Jess Glynne is due on stage at 7pm and The Spice Girls are expected from 8.15pm. The concert is due to finish between 10.30-10.45pm. Patrons have been asked to use public transport to and from the concert.

An app which provides information in relation to the event is available from www.event.app.