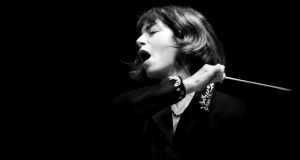 RTÉ CO/JoAnn Falletta
NCH, Dublin 8pm €15-€45/€12-€40.50 nch.ie
New Yorker JoAnn Falletta, who was principal conductor of the Ulster Orchestra from 2011 to 2014, makes her Dublin début as part of the RTÉ Concert Orchestra’s Signature Series. Her Viva España programme is partly pure Spanish, through the Second Suite from Falla’s Three-Cornered Hat, the Intermezzo from Granados’s Goyescas, and the Concierto de Aranjuez by Rodrigo, with Craig Ogden as the guitar soloist, though Falletta can probably play it too – she trained as a guitarist before turning to conducting. The other works are by a Frenchman (the Pavane pour une infante défunte by Ravel, whose mother was Basque), an Argentinian (Ginastera’s Four Dances from Estancia) and a Russian (Rimsky-Korsakov’s Capriccio espagnole).

Crash Ensemble
NCH Studio, Dublin 8.30pm €15 nch.ie
Crash Ensemble celebrated its 20th birthday this year with CrashLands, a project which saw 20 specially-commissioned works being premiered in unlikely spaces around the country. All of the pieces are now being brought together, sequenced over two days (last night and tonight) at Crash’s home base in the National Concert Hall. There is video from the CrashLands performances by Brendan Canty and poems written in response to the pieces by Doireann Ní Ghríofa.

RTÉ NSO/Nathalie Stutzmann NCH, Dublin 7.30pm €25.50-€38/€22.95-€34.20 nch.ie The RTÉ National Symphony Orchestra’s principal guest conductor Nathalie Stutzmann has got a new job. She will be the next chief conductor of Norway’s Kristiansand Symphony Orchestra. She made her debut in Kristiansand (pop 89,000) last March, and her appointment was announced on November 14th. One of the works she conducted in Kristiansand was Richard Strauss’s Death and Transfiguration, and she repeats the piece in Dublin, where she has paired it with the best-loved of 18th-century Requiems, the one which Mozart left incomplete at his death in 1791. The NSO is joined by the RTÉ Philharmonic Choir and soloists Máire Flavin, Sara Mingardo, Robin Tritschler and Leon Kosavic.