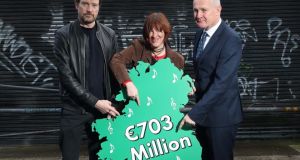 Eleanor McEvoy, Steve Wall and Victor Finn at the launch of a new report for the IMRO. Photograph: Robbie Reynolds

Digital platforms such as YouTube and Facebook should be legally compelled to remunerate fairly musicians whose work is uploaded to their services, according to the organisation that represents music copyright-holders in Ireland.

The Irish Music Rights Organisation (IMRO), which collects and distributes royalties on behalf of songwriters, composers and music publishers, called for new EU legislation on the issue at the launch of a new report on the contribution of the music industry in Ireland.

The report, The Socio-Economic Value of Music to Ireland, produced by Deloitte for the IMRO, says the music industry supports more than 13,000 Irish jobs and contributes more than €700 million, directly and indirectly, to the economy each year.

The report also sets out a number of recommendations to maximise the contribution of music in Ireland, including a national music strategy to co-ordinate activities across the sector, develop creative skills, address income uncertainty and ensure a fair return for music creators.

Speaking at the launch, IMRO chief executive Vincent Finn said that Irish music deserved the same level of focus and strategic support that has gone to the film industry here.

He said measures such as allowing the artists’ tax exemption to be spread over a five-year period would make it easier for young artists at the outset of their careers.

However, Mr Finn said the primary focus was on addressing the copyright issue.

He drew a clear distinction between digital service providers, such as streaming services Spotify, Deezer and Apple Music, who pay for the content they provide to users, and platform services such as YouTube, Facebook and Soundcloud, who as technical intermediaries claim they are not required under EU Safe Harbour provisions to pay creators for content uploaded by their users.

The European Commission is currently examining legislation in this area and issued a draft copyright directive in September 2016.

“We now have streaming services making a positive contribution to the future of the industry,” Mr Finn said.

“But they are being unfairly competed against by the platform services. One way to address that is through the copyright directive. We’re glad to note the Government has recognised there is an issue to be addressed and is working with the [European] Commission . . . to ensure that issue is properly addressed.”

Mr Finn expressed the hope that the current proposals would make it through the European Parliament.

“They would go some way to providing a future for the creative industries,” he said.

Also speaking at the launch, musician Steve Wall said that he had received 97p for streams of his band The Stunning’s Brewing Up a Storm on YouTube last December.

“We have a reasonable expectation that they should play fair on this,” added Mr Finn.