Slim chance: Why has Eminem’s music aged so badly?

The rapper Eminem lambasted US president Donald Trump over immigration, corruption, racism, the NFL and gun control in a freestyle performance called "The Storm" at the BET Hip Hop Awards on Tuesday, October 11th. Video: BETNetworks 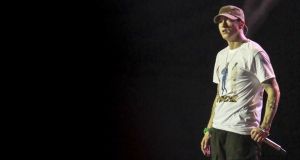 At the 2000 MTV Video Music Awards, Eminem commanded an army of bleach-blonde soldiers. Beginning his performance of The Real Slim Shady outside New York’s Radio City Music Hall, Em and his squad of lookalikes entered the arena and made a beeline for the stage like white blood cells rushing to a wound.

It was a clever performance, ribbing on the wacky single’s central theme: that when it came to the Detroit rapper, accept no imitators. But it also worked a microcosm for the wider pop climate. At the turn of the century, Marshall Mathers was absolutely everywhere.

It’s damn near impossible to describe the cultural currency Eminem had back then. His popularity was somewhere in the region of finding money you didn’t know you’d lost. The narrative of the white rapper who’d come up in the harsh arena of Detroit seduced the public so much that they made a semi-factual movie about it, 8 Mile, with the emcee himself in the lead role.

Em (Slim Shady to some of those who absorbed his alter-ego first) didn’t leave a footprint in the pop landscape – it was more like a meteor crater. But you won’t feel the reverberations from the impact today. Instead, his most dominant era – roughly 1999 to 2002 – has fossilised, with little lasting appeal or relevance.

I’m sure there are people who kept their Anger Management tour T-shirt and still bump My Name Is weekly. That doesn’t mean Eminem’s music hasn’t aged as badly as Donald Trump’s 2013 tweets. Sonic evidence of his influence on the current generation of artists is extremely limited. Even his biggest hits rarely seem to get aired in public these days. Put it this way: Eminem’s vicious beef with Ja Rule might have smashed the Murder Inc Records juggernaut 14 years ago, but I know whose singles I still hear go off in the club.

That’s not to suggest Eminem – whose new album, Revival, is expected to be released this weekend, his first since 2013’s The Marshall Mathers LP 2 – never had any talent. His technical proficiency on the mic is, at times, truly stunning. Analysing the way he puts clusters of syllables together is akin to glancing under the bonnet of the starship Enterprise.

And take a look at his recently released live a capella performance,which rinses Trump from every angle. It’s a brawny, gripping piece of slam poetry. But let’s be real: the emcee didn’t ascend the highest peaks of planet pop solely because of his rap skills.

Eminem’s music plays like a schlocky horror movie, mixed with documents that spilled out of a family court, and extracts from a bratty teenager’s diary. He made sex jokes about celebrities and used his gift for turning a phrase to paint violent imagery, penning, for example, narrative-driven songs about killing his wife Kimberly Scott complete with sound effects.

His shtick was built on shock value and kids were drawn in like Icarus to the sun. But what happens when the terrible teens grow up? Eminem’s gimmicks hold up about as well as a Crazy Frog single.

There are more thorns peppered throughout Eminem’s catalogue, specifically his use of homophobic language

Music that is made by artists whose core motivation is to test moral boundaries is often an exercise in short-termism. Eminem wasn’t making any broad political statements when he joked about impregnating The Spice Girls. Even the most controversially violent rap acts – NWA, for example – often had important messages on top of the beats. In Em’s case, when the conservative outrage dissolved and public handwringing ceased, there wasn’t much in his music that cut to the heart.

When Eminem tried to do deep-thinking, the results were mixed. His anti-Bush tracks barely landed a glove on the ex-US president. And then there’s Stan, supposedly his insight into obsessive fans. There are some impactful insights into self-harm, but the central plot is so overblown, so ham-fisted, that whatever message Em might have been trying to convey gets lost in the crush. Not helping him is the chorus, which is so irrelevant to the narrative that it sounded like it was beamed in from a completely different song. Which, of course, it was, having been cut and pasted from Dido’s Thank You.

(Actually, if there’s one artist who has a body of work that has aged worse than Eminem’s, it’s Dido. Partially powered by the success of Stan, her first album No Angel sold 21 million copies, about 62 per cent of which, I imagine, are now buried in landfill.)

Music doesn’t always have to be about something, of course. Sometimes “Get it on, bang a gong, get it on” is all you need. But the cringe comes hard when you hear Eminem tune his voice to a goofy shriek so he can ridicule Moby or launch sustained, unnecessary attacks on artists such as Britney Spears and Lauryn Hill. It’s tough to enjoy his music even on a basic “sounds pretty nice to listen to” level.

There are more thorns peppered throughout Eminem’s catalogue, specifically his use of homophobic language. While rap still has a way to go to cure itself completely of this scourge, strides have been made over the past 15 years in eradicating it. At the height of his fame, Eminem dropped the words “fag” and “faggot” like he was popping TicTacs into his mouth.

Eminem always defended his use of the words by stating he wasn’t exclusively referencing gay people, which is probably true. But the idea that a straight man could anoint himself the person to recontextualise those ugly terms is an impossible sell, especially when he uses them in exactly the same barbed way that overt homophobes have for years.

Dated production choices haven’t helped Eminem’s increasingly stale catalogue, either. He was often at his best when he breathed fire on his mentor Dr Dre’s beats (see Forgot about Dre). But the producer’s output dipped in quality during the opening years of the new century as an obsession with audio fidelity made his spotless, symmetrical beats often too sterile for purpose.

In his attempt to evolve into his own producer, Em made subpar orchestration that lurched forward like a chugging tugboat (Sing for the Moment, for example). Even the songs he produced for other artists have aged badly.

It all adds up to an artist rooted in a certain time and place who can’t cast a shadow outside of that era. Not helping his flailing relevance has been Eminem’s latterday albums, which are uniformly terrible. He’s a 56k rapper in a 4G era, an artist who emerged to rattle America during the final days of the Clinton era, when the nation’s interest in what happened in the Oval Office had nothing to do with nuclear codes. With his new Trump takedown, Eminem seems set to position himself in the resistance. It’s no time for dumbass jokes.

50 Cent
Curtis Jackson was generating serious street-level buzz back in 2002, but it was Eminem who managed to secure his signature, signing the Queens rapper and noted shooting target to his label Shady Records. With hit singles, albums, a semi-autobiographical movie (Get Rich or Die Tryin’, directed by Ireland’s own Jim Sheridan) and even a couple of videogames to his name, 50 and his gruff gangsterisms became a bonafide pop culture juggernaut. But his popularity has dwindled recently as the quality of his music declines.

Obie Trice
Also from Detroit, Obie Trice announced himself on Shady Records in 2003 with the Eminem-produced single Got Some Teeth, a memorable showcase for his wacky sense of humour and rhythmic rap style. He never built on that early promise, though, and after just two albums, he departed the label in 2008. Trice is still plugging away. His last album, The Hangover, came out in 2015.

Cashis
Cashis was all over the 2006 compilation Eminem Presents: The Re-Up, ostensibly priming him to be the next Em protege in line. But he left Shady Records in 2011 without an album to his name. Cashis has stayed prolific since, though, releasing a monsoon of music independently. His second album, The County Hound 2, even featured four Eminem-produced tracks.

Yelawolf
Alabama emcee Yelawolf fuses concrete-tough raps and country-rock grooves. With Eminem in the executive producer’s chair, Yela makes the kind of records that could get a Lynyrd Skynyrd fan interested in hip-hop. The hype that powered the first phase of his career about five years ago has largely petered out. Yela’s still on Shady Records and just last month he put out a third album that few people heard about.

What is Houseparty, the app everyone’s talking about – and not in a good way?
5 Miracle warnings and a lack of bull
6