Christian Blackshaw: ‘Many performers make Mozart sound mechanical. He is absolutely not’

Blackshaw, one of the leading interpreters of Mozart, is spurred on by a determination to get to the heart of the composer’s true intentions 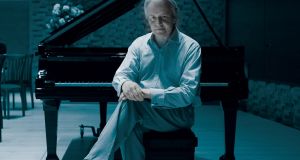 Christian Blackshaw: “If I was to be psychoanalysed, I’m not really the type to walk out on to a concert platform to adulation, but I can’t help it and I don’t really know why”

If you were ever to wonder what actually happens to a dream deferred, you might well ask pianist Christian Blackshaw, who caught up with his at the age of 64. After a bright start, he faded into relative obscurity, until 2013, when his recordings of the complete Mozart piano sonatas at Wigmore Hall received international acclaim.

The New York Times referred to his interpretation of Mozart as “immaculate” and “exquisite”, but this only puts Blackshaw slightly at ease. “It’s just been so heart-warming that [despite me] not having made some records before, reviewers have been very positive. In a way, that makes me worry that I now have more to prove . . . but on the other hand it gives a bit of comfort in order to go on.”

Blacksaw was a protege of the great Clifford Curzon and studied with Gordon Greene and at the Leningrad Conservatoire under Moisei Halfin. On the brink of international stardom, a series of events forestalled his burgeoning career. In 1990 his wife died, and he had to raise three young daughters alone.

“It was a very tragic experience, but out of tragic experiences, good has to come, and it would be a very poor thing to crumble completely. I was rather determined that I wanted to play the piano very much and wished to have the performance opportunities. There were a few years when those opportunities did not present themselves.”

It was also around this time that Blackshaw turned down a recording contract in Munich, when the publicity might have served him well. He has no regrets. “It was a very easy decision. It was not the right time to place myself under that level of commitment, because I just felt I would be able to do it better in the future. Now what that future would be – one, two, 10 years, I didn’t really know.”

What seems to set Blackshaw apart is that he is spurred on not by ego but a quiet determination to inch ever closer to the composer’s true intentions. Now considered one of the leading interpreters of Mozart, the vocal elements of his music eluded him at first, but “once you try to find your feet with him, you’re off. It takes you the whole of your life and the most tremendous responsibility, because so many performers can make him sound, dare I say, mechanical and he is absolutely not.”

Blackshaw paraphrases a famous remark Mozart made to his father about a performance by Clementi in the early 1780s in which he played “very correctly, even brilliantly, but he doesn’t have an ounce of feeling”. He finds this telling. “Always with Mozart there is this very human, often very vulnerable, singing quality that you have to bring to so much of his music.”

Blackshaw is referring particularly to the “first printed sonatas . . . intimate keyboard works” that stayed with Mozart his whole life and represent what Blackshaw hesitantly calls “a journey”.

Described by Artur Schnabel as “too easy for children, and too difficult for artists”, for Blackshaw “each movement is a little miracle of its own. You see little variations and arias and brilliance and profundity and joy. All the things that make a composer so human. All his music is infused with this vocal quality. But that’s where the difficulty lies – it’s very difficult to make a percussive instrument sing. But that’s one of the greatest challenges of our lives being pianists.”

When I ask Blackshaw about the perception of him as devoid of ego, his response confirms that impression. “None of us can afford to sit in an ivory tower, therefore I suppose I must have an ego in order to walk on to a concert platform with the expectation that people who’ve bought a ticket to listen to someone who claims to be able to interpret the music in the manner in which it was composed. But I try not to make that more important than the expression of the love I have for the music.”

In what way does age affect his work? “You hear a recording of Yehudi Menuhin playing the Elgar Violin concerto when he was a teenager and your jaw drops open. It’s just extraordinary to have that maturity. Or wonderful [Herbert] Blomstedt, who I had the privilege of playing with a few years ago but he’s now – I think – 88. It doesn’t mean anything. He has found a level of sublime music-making that is incredibly touching.”

He feels a lifetime of experience brings a greater responsibility. “By now I should know much more, but I’m not sure if I do,” he says. “It just depends on the circumstance. If the performer is really in tune and sincere with the composer, and the listener is in the receptive mood, then something special can really happen.

“I really don’t like talking about myself in such terms, but maybe that’s the prelude to say that I’m going to. I was in Petersburg about four weeks ago performing the Schumann concerto with wonderful Valery Gergiev and the Mariinsky Orchestra. We had performed it together in the past but there was not very much rehearsal. That is not a criticism: that is his way. The concert flew, and I will remember that performance because maybe sometimes less rehearsal is good. It’s a balance that I constantly worry about – when can I trust myself to leave the music alone in order that in a concert it can be fresh and alive?

“It’s rather like life, isn’t it? [To be] in the moment somehow, with the knowledge of experience, but with a freshness of approach.”

Blackshaw’s awe of the great virtuosos is palpable. He describes a recent belated Austrian debut in a monastery near Linz. “Bruckner had been there, and the older you get, the more I revere these amazing men.”

Does he feel hampered by this reverence? “No. I just feel more of a sense of mystery. How is a human being capable of writing such work?”

He recalls Maria Callas’s words: “‘All you have to do is look at the score’. That’s all the interpreter has to do, because the composer has thought about everything for you. The problem is, we’re only human: we have to recreate, reinterpret.”

He understands now why the pianists he reveres, such as Rudolf Serkin and Wilhelm Kempff, would not listen to their own recordings. “I’d want to do a lot of it all again. Not necessarily better but maybe different. Is that a bad thing to admit?” It helps him now to think of recordings “as rather like your children when you take a photograph. It’s that moment in time.”

Blackshaw practises in a small studio in his garden, sometimes late into the night. “It all sounds very idyllic and all very privileged. It’s where I can think a bit – I do walk around but I do work incredibly hard, because you can’t enter this life lightly.”

On performance days he is superstitious: he must change his clothes in a certain order. “If I’m disturbed doing that, I fret, and then, when I have my suit on, I feel ready to try to commune with the composer.” He is “often terrified”, but when the performance goes well, “there’s a sort of spiritual element and it can transport everybody. It’s nothing to do with self-indulgence. That is too sad, and profane almost. It is a very rare moment of exultation.”

His performances eschew the theatrical in favour of focused intensity. He prefers the lights dimmed, as it “makes me feel closer to the composers”.

Blackshaw’s responses are considered and he often doubles back to make sure he has been entirely truthful of himself. “If I was to be psychoanalysed, I’m not really the type to walk out on to a concert platform to adulation, but I can’t help it and I don’t really know why. I have to fulfil my emotional needs through the works of these incredible composers.”

He faces a dilemma every day. “Am I good enough to put myself forward to be playing a Mozart sonata or a Beethoven piano concerto or a Schubert song cycle? Whilst I do it with the greatest respect to the composer, I feel I’m a little bemused that somebody with my character can do it. It’s the conflict I feel inside myself.”