No room for squares: 80 years of Blue Note jazz

Coltrane, Davis, Monk: With its roster of geniuses the New York label defined an art form 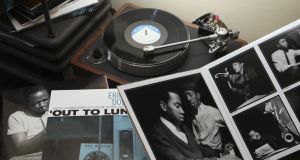 Blue Note: the label’s respect for music, and the musicians who made it, set it apart. Photograph: Tony Cenicola/NYT

“The Finest in Jazz since 1939” says the famous tag line, and 80 years later it’s still hard to disagree. The Blue Note label, which celebrates that remarkable anniversary this year, exerted an influence on modern jazz that is impossible to overstate.

Those hip covers are the embodiment of jazz cool – iconic portraits of the label’s artists paired with daring typography that still define jazz in the public consciousness. And inside those gorgeous sleeves?

Well, inside may be found some of the greatest art of the 20th century, the work of a surprisingly small and tight knit community of African-American musicians who left a legacy that will live for as long as there are ears to hear it.

When it began, Blue Note was just one of a dozen or so small independent labels in New York city, most run by amateur enthusiasts, documenting the radical sounds happening in the city’s jazz clubs.

Rarely making anything resembling a profit even at the height of its artistic success, Blue Note should have gone the way of its competitors, folding after a few years

Founded by two German emigres with no background in the recording industry, and rarely making anything resembling a profit even at the height of its artistic success, Blue Note should have gone the way of its competitors, folding after a few years.

But from the beginning, the label showed a respect for the music, for the musicians who made it, and for the listeners who supported it, that set it apart.

Co-founder and producer Alfred Lion, born in Berlin in 1908, was a genuine fan of the music, and although he was selective about the artists he recorded and dogged in his pursuit of recording quality, he produced with a light touch, understanding his artists, getting out of their way and giving them licence to create according to their own muses.

Blue Note’s earliest recordings, made during the war years, were of old-school jazz musicians such as Sidney Bechet and James P Johnson. Indeed, during its first few years, the label seemed unaware of the be-bop revolution that was happening around it.

It wasn’t until Lion decided to record the previously neglected Thelonious Monk, one of the architects of that revolution, that Blue Note found its groove. Released in 1952, Genius of Modern Music Volumes 1 & 2 – as Lion presciently titled the great pianist’s first recordings – stand today as some of the most influential recordings in jazz history.

Yet it is music that the world might never have heard without Blue Note’s faith in Monk’s wayward genius.

It was also in the early 1950s that Blue Note began working with mercurial sound engineer Rudy Van Gelder. An optometrist by trade, Van Gelder was a true pioneer of the recording process, setting up a studio in his parents’ living room in Hackensack, New Jersey, constantly experimenting with new equipment and recording techniques.

Meticulous to a fault, he was so secretive about his working practices that he insisted on his microphones being removed from their positions before any photographs were taken at his recording sessions.

Respect for musicians also meant that Blue Note, in contrast to its competitors, offered payment for rehearsals so that, unlike the “blowing sessions” on standard material being produced by most other New York independents, Blue Note recordings increasingly featured carefully arranged original material, opening a new avenue for jazz creativity that the label would document in the ensuing decades.

Like Lion, Wolff was from Berlin and a true fan of the music; musicians remember that when the photographer stopped snapping and started dancing, that was usually a sign of a good take.

The striking photographs that emerged from those sessions formed the basis for Reid Milses's iconic covers. The distinctive look – black and white with a single colour overlay – was originally a way of saving on printing costs but it came to define the label and has been much imitated since.

As the 1960s wore on, the commercial challenges of running an independent art music label began to overwhelm Lion and Wolff, and in 1965 they sold the label to Liberty Records.

A couple of years later, unable to function in a larger organisation, Lion retired and had little further connection with the label, or with jazz. Wolff took over as producer and soldiered on for another few years, but by the early 1970s, the label as originally constituted was all but dead.

But there was still the Blue Note back catalogue. The Byzantine machinations of the recording industry have meant that, at different times in the past 80 years, that artistically priceless body of music has been owned by Liberty, by United Artists, by EMI, by an anonymous private equity firm, and now by entertainment giant Universal Music Group.

But remarkably, through it all, the original Blue Note ethos has survived. The back catalogue continues to sell, and the modern iteration of the label – no longer a scrappy independent, but in some ways still behaving like one – has landed notable commercial successes with vocalists such as Norah Jones and Gregory Porter.

And crucially, under the stewardship of genuine music fans including Bruce Lundvall and Don Was, the label has continued to sign some of the most innovative jazz artists, including pianists Jason Moran and Robert Glasper, and trumpeter Ambrose Akinmusire.

The current fractured state of the recording industry and the perilous economics of creative music are such that it is hard to imagine another label ever emerging to so completely define a category of music (though the ECM label, founded by another German, Manfred Eicher, comes close).

Blue Note came along at just the right time, in just the right place, and Lion and Wolff made glorious hay while the sun shone. But looking back, what is most striking about the Blue Note story is how a relatively small group of musicians – the same names keep cropping up in the sideman credits – could come to so completely define an art form.

At a time when black Americans were still battling for civil rights, these great artists raised their voices and created a language that musicians around the world soon wanted to learn and speak. Blue Note recognised their artistry, paid them the respect they deserved, and let them tell their own stories.

And that’s not a bad life’s work for two immigrants from Berlin who arrived in the US in the late 1930s with little English, no money, and no idea how to run a record label (current US administration, please note).

So thanks Blue Note. Respect, and happy birthday.

Thelonious Monk: Genius of Modern Music, Vol 1 (1951)
The title was no idle boast, but it took Alfred Lion’s faith and infinite patience to bring the wayward genius of be-bop to a wider audience. If you own just one Blue Note record make it this one.

John Coltrane: Blue Train (1958)
Coltrane only visited the Blue Note offices to borrow some Sidney Bechet records, but Alfred Lion coaxed from his vistor an album that the great saxophonist rated among his best.

Cannonball Adderly: Somethin’ Else (1958)
Aside from the glorious music, notable as one of Miles Davis’s last appearances as a sideman. The trumpeter’s raspy voice can be heard at the end of One for Daddy-O asking “Is that what you wanted, Alfred?”

Herbie Hancock: Empyrean Isles (1964)
Herbie Hancock’s revelatory 1964 recording included Cantaloupe Island, a tune which has become one of the most covered compositions in jazz.

Wayne Shorter: Speak No Evil (1966)
For many, Speak No Evil is the crowning glory of Blue Note’s 1960s output, an ear-opening collection of tunes from a saxophonist who would soon be the most revered composer in modern jazz.

Robert Glasper: Black Radio (2012)
That a Blue Note record could win a Grammy for Best R&B album was evidence enough that the label was still relevant in the 21st century; Glasper’s hip sound points the way for a new generation of jazz musicians.

John Scofield: Time on My Hands (1990)
Blue Note’s return to form in the late 1980s included guitarist John Scofield’s hard-swinging debut for the label which blasted a hole in the acoustic-electric divide in American jazz.

US3: Hand on the Torch (1993)
London rap group US3 couldn’t believe their luck when EMI allowed them unfettered access to the Blue Note archives; each tune on the hit album was built on samples of classic Blue Note recordings.

Isabel Allende: ‘Where are my roots? They are in my books’
9