Plus: songs you have to hear from Anna Mullarkey and Rosie Carney 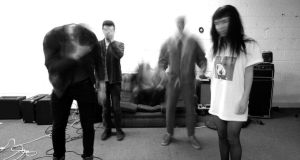 Just Mustard: their new album was released independently and quietly enough but has picked enough online plaudits to turn heads

Why: Shoegaze isn’t dead, it just lives in Louth. That’s a conclusion to be drawn from listening to Just Mustard, a Dundalk five-piece who released their debut album Wednesday earlier this year.

The eight tracks on the release suggests they are A-plus students of the genre and have soaked up a lot more beyond those borders.

Screeches of menacing metallic guitar noise, undulating basslines and disembodied vocals build to a crescendo on the opening track Boo and it’s clear within five minutes, they ain’t messing around.

There’s no let-up from there with Curtains amping up the darkness and Pigs bringing a dose of the fear to proceedings. Despite its caustic mood, Wednesday is a swirling atmosphere-heavy thrill-ride, and fans of bands like My Bloody Valentine, Slowdive and Ride will jump on the rollercoaster.

Wisely recorded as live without glossy post-production and you can almost feel the sweat, light and heat from ooze from the speakers.

As with most bands of their ilk, the lyrics remain mostly indecipherable, used as ethereal texture and leads to follow in the thread of sonics that engulf the listener.

The album was released independently and quietly enough but has picked enough online plaudits to turn heads. It’s easy to imagine hearing these songs live will deliver that heat, sweat and light promised and you can book yourself in for their slot at next weekend’s Hard Working Class Heroes Festival in Dublin for the IRL experience, or catch them in November in Cork, Limerick and Dublin touring with rising Irish band Whenyoung.

You have to hear this... Anna Mullarkey - Baby Dragon

It would be hard not to be impressed by this Galway singer and producer’s debut song. Mullarkey is one-third of the band My Fellow Sponges but Baby Dragon soaks up none of that act’s cabaret folk. Baby Dragon is a pop song of modern times drawing on glacial synth patterns and Mullarkey’s layered voice to create a soft-glow synth pop track that marks a new beginning for the singer.

You have to hear this...

I don’t know but I won’t fade,” she sings with the help of Lisa Hannigan on a gently devastating track.