Michael O’Shea, a talented experimental musician who died in 1991, was the definition of enigmatic 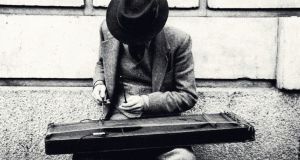 While in London, Michael O’Shea would perform in Covent Garden and on the tube passageways of the West End. The instrument he is playing, which he called Mo Chara, was made out of a door he found in a skip. Photograph: Edward Graham Lewis

“The music echoes in the emptiness. It reminds us where we came from and where we’re bound.” David Mutti Clark was referring to the blues in his book Professor Brown Shoes Teaches the Blues, but the idea easily applies to music made in our own recent past. Songs left behind, resigned to obscurity, until an inquisitive soul recovers it from the ether so that others may reconsider the art that comes from a place a little more.

The Dublin label and shop All City Records has recently been delving into this unknown with a series of reintroduced gems from Ireland’s past with their Allchival imprint.

Whether it’s Quare Grooves, a compilation of Irish-made Seventies groove and funk or the rerelease of Dublin producer Stano’s debut album of experimentalist new wave from 1983, the label has been recontextualising old music for new worldwide audiences, keen to snap up deluxe reissues from artists previously unknown to all but a few.

For their latest reissue, the label turned its attention to the debut and only release from Michael O’Shea, a nomadic performer born in Newry in 1947 known for his self-made dulcimer-style instrument made out of an old door he found in a skip which featured strings and was played with chopsticks. He called the instrument “Mo Chara” and it was the culmination of a life spent wandering.

O’Shea was the definition of enigmatic, a roamer who left Carlingford when he was 16 where his family lived to explore the world. He joined the British army but went awol and was later jailed. In 1972, he went to Bangladesh as a relief worker during the famine there. On his second stint there a couple of years later, he contracted hepatitis and amoebic dysentery and convalesced for a year.

O’Shea already had a keen interest in Irish folk music and played the harmonica, but it was during this downtime that he learned to play a sitar. Shortly afterwards, he began to busk, anywhere and everywhere. In France, he encountered an Algerian musician called Kris Hosylan Harp, who was playing an instrument called a zelochord, and needing money for a trip to Turkey he was to undertake, he built Mo Chara, the zither-like instrument inspired by the sitar and zelochord in Munich in 1978. This unique door instrument would open surprising doors for him.

O’Shea played his instrument with echo and phaser guitar effects that lended his music an otherworldly quality. While in London, he would perform on Medley Road or Covent Garden and on the underground tube passageways of the West End.

He was spotted by Will Sproule, who worked for the well-known jazz club Ronnie Scott’s (and Scott himself gave O’Shea slots at the club which lead to a European tour with Don Cherry), supported Ravi Shankar at the Royal Festival Hall and, rumour has it, had more than a passing acquaintance with Alice Coltrane.

But luck wasn’t on O’Shea’s side. A project with Rick Wakeman of Yes fame was shelved and Michael returned to busking on the streets of London. It was in Covent Garden, then a bohemian place occupied by artists, where Michael was spotted by Graham Lewis and Bruce Gilbert, members of the post-punk band Wire, who were drinking in the nearby White Lion pub. Wire were on downtime and the pair were exploring experimental music on their Dome label.

“I’d gone out for some fresh air and I just heard this incredible noise and I just sort of followed it to come across him playing music which had these ancient roots,” Lewis remembers.

“Michael had set himself up in a doorway, which further amplified his music, and gave him a stage. There he was, resplendent in a turban, double-breasted blazer, pleated skirt, high-heeled shoes with buckles and hooped earrings. It was quite a memorable sight.”

The next day, the pair bumped into the Evening Standard cartoonist and one-time bassist with The The – Tom Johnson – who had made acquaintance of sorts with O’Shea.

“He trusted me a little bit but he didn’t seem to trust anybody else,” says Johnston. “I invited him somewhere and he just wouldn’t go. He just did his own thing. I was having a drink with Bruce and Graham and I mentioned him to them.”

They were introduced and Lewis and Glibert offered O’Shea some recording time in the studio they were working from, Blackwing.

“It was very apparent that Michael was a bit of a will-o’-the-wisp,” laughs Lewis. They would see Michael around Covent Garden but he never took them up on the offer, until, nearly a year later, on July 7th, 1981, he turned up at the studio one morning.

“Michael was a great believer in the cosmic and the mysterious,” Lewis says. “There he he was sitting in the sun smoking a fag. He was like – ‘the planets have lined up in the right way so I was thinking today’s the day’.”

The studio engineer Eric Radcliffe miked up his instrument in as many ways as they could think of and the recording began.

“He had one false start,” Lewis recounts. “I think it was necessary to go outside and have a special cigarette. And then he came back and then proceeded to play what you hear on the record. It was extraordinary.”

The resulting 15-minute composition, No Journey’s End, opens the reissued album and is a thrilling piece of music. O’Shea plays Mo Chara like a wooden gateway to different cultures, drawing from Indian tones, Middle Eastern scales and Irish tradition. It soars with a spindly oriental lilt, dips into uptempo hammered percussion, twists and drops to a rumble with the rhythmic pattern of a bodhrán.

“That piece really is the essence of everything that he was doing,” Lewis says.

The album was fleshed out with recordings made in the studio, with O’Shea’s curious nature roaming free on the effects and equipment present. Lewis took a photo of O’Shea busking that was used for the artwork. Wearing a tweed suit and with his head tilted down, looking at his instrument, with a hat obscuring his face, it’s a fitting enigmatic portrait of a man few got to know.

“Michael didn’t even know I’d taken it,” Lewis remembers. “Otherwise he’d been posing or pratting about it. He wouldn’t have allowed you to be serious about it.”

One of the things we do know from talking to Lewis and Johnston, was that O’Shea indeed loved mischief.

“He really stuck me up one night,” Johnston laughs. “ Graham and Bruce had an art exhibition in a huge big warehouse in Waterloo and Michael came to it. While I was talking to him, he produced a whole bottle of Southern Comfort from under his coat and he offered me a drink. I took a slug from it and he just burst out laughing. About half an hour later we were in the pub and I suddenly went unconscious. I fell over and blanked out. He had put something in it, hallucinogenic stuff, and apparently he was famous for doing that.”

Lewis remembers his antics too.

“Once he turned up at a pub in his tweed suit and he’d been entertaining people and then he’d managed to climb out of the window down the drain pipe, get changed in the toilet downstairs and then come back in dressed as a woman.”

After the release of the album on Dome, O’Shea’s only known recording was with Stano, and his discovery echoed Lewis and Gilbert when he followed his ears and saw him busking on Dublin’s Grafton Street one day.

“I’ve never heard anything like before or since, it was just otherworldly,” he says.

Stano had heard Dave Fanning play his music on the radio and asked him to record for his album Content To Write In I Dine Weathercraft (the album also reissued by Allchival) on the spot, which happened a week later.

“He looked like a Hare Krishna, he was a very quiet and gentle man. He was only in the studio about four or five hours and we had a bit of a chat and he went off and that was the last time I ever saw him.”

O’Shea’s contribution can be heard on the track Seance of a Kondalike.

As time went on, O’Shea stopped travelling and settled in London. His acquaintances would see him around occasionally.

“Somebody I knew had seen him at a rave somewhere,” Johnston recalls.

“He came and went as he pleased and that’s the way he always was,” said Lewis. He wasn’t somebody you’d expect to see next week.”

The Allchival-reissued album has revived and reintroduced this singular Irish busking artist to audiences anew, attracted to O’Shea’s mythical music untethered to a single period or place.

“It is pretty timeless. It could be from the turn of the century or the last century,” Lewis says. I think that’s what’s so special about it – it feels so ancient. At the same time, the use of electronics made it very spacey and futuristic.”

It’s fitting to leave the last words to the artist himself. “If you listen - really listen – it’ll go in one ear and it won’t come out the other.”

Michael O’Shea’s album is available from moshea.bandcamp.com and All City Records, in Dublin

How was the Irish Border drawn in the first place?
9 Bones are not lovely
10