Singer crafted some of the defining songs of the punk era 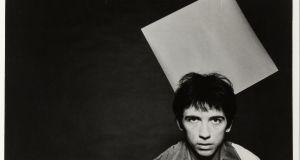 Pete Shelley, lead singer and main songwriter of Manchester punk band Buzzcocks who died on Thursday at the age of 63, played a major role in the first – and arguably most exciting – wave of the UK punk scene. Shelley and his infectious songs stand firmly alongside Sex Pistols, The Clash, Siouxsie and the Banshees, The Jam, and The Damned.

The singer died of a suspected heart attack in Estonia, where he had been living for some years with his Estonian wife, Greta.

Born Peter McNeish in 1955, in the Lancashire town of Leigh, Wigan, Greater Manchester, he formed Buzzcocks in early 1976 with one of his best friends, Howard Trafford. Both were studying at the (then) Bolton Institute of Technology, the pair linking up when McNeish replied to a college noticeboard ad for aspiring musicians to form a band. There was one stipulation: they had to like Velvet Underground’s song, Sister Ray.

Taking the stage names of Pete Shelley and Howard Devoto, in February 1976 the two travelled to a Sex Pistols gig in High Wycombe. Suitably motivated, the pair returned home and arranged a gig for Sex Pistols at Manchester’s Lesser Free Trade Hall in June. At a second arranged gig for Sex Pistols in July, Buzzcocks made their official debut. By the end of 1976, they were part and parcel of the heady early wave of the UK punk scene.

By the close of 1976, they had recorded their first EP, Spiral Scratch, a landmark punk release noted not only for being issued on their own independent label (New Hormones) but also for aiding the establishment of DIY labels across the UK. Indeed, the self-release of the EP has often been cited as the emergence of the term “indie” to define not only a form of music but also a creative and publishing business model.

The recording of Spiral Scratch was rough and ready (it was produced by Martin Hannett, who would go on to produce albums by other Manchester acts such as Joy Division, New Order, Durutti Column, Magazine), and a strident, minimalist product that would be released (again) on vinyl last year by Domino Records to commemorate its 40th birthday.

Some 18 months after they formed, with a groundbreaking EP already released, Buzzcocks signed to major label United Artists. By this time, focusing on more streamlined music, they had quickly left their peers behind (as well as original co-founding member Howard Devoto, who went on to form the post-punk group, Magazine).

Their debut label single, Orgasm Addict, caused a storm, perhaps too inevitably, from its title and content to its famous cover (a collage of an iron-headed woman, created by radical artist Linder Sterling, and devised by graphic designer Malcolm Garrett). It was banned by the BBC, and even now remains a singularly audacious evaluation of persistent sexuality. Things would change after this, however, as Shelley – now Buzzcocks primary songwriter with Devoto gone – would concentrate on defining a trademark influential sound.

In his fusing of infectious melodies with urgent guitar, Buzzcocks practically invented punk-pop. Influenced themselves by The Ramones – New York’s battering ram of whistle-friendly punk – Shelley’s songwriting prolificacy went into overdrive on three albums in two years. Another Music in a Different Kitchen, and Love Bites (both 1978), and A Different Kind of Tension (1979) demonstrated not only his perfectionism in the fusing of rhythmic pop with driving guitars but also his dissatisfaction with its boundaries.

In 1976, Shelley was content enough with singing about boredom, but as a bisexual, he soon tired of punk rock’s antipathy to explorations of sexuality. Three years later, the lyrics of (title song) A Different Kind of Tension explicitly referenced post-modernist author William Burroughs. Time was passing, moods were changing, and despite being inarguably the best punk-pop songwriter of his generation, the songs weren’t charting high enough.

Buzzcocks split in 1980, having popped over to Dublin twice in the late 1970s in their brief existence – Trinity College (Exam Hall) and the Santa Anna Concert Club, Mary Street – before reuniting in the late 1980s.

In more recent years, Shelley had concentrated on making a living with a much-changed group, albeit safe in the knowledge that his songwriting had influenced successive generations of musicians.

His legacy is that, of course, but specifically in classic punk-pop songs such as Fast Cars, Love Battery, Fiction Romance, Autonomy, Ever Fallen in Love (With Someone You Shouldn’t’ve), What do I Get?, Love You More, Promises, Harmony in my Head, and Everybody’s Happy Nowadays. And the rest.

“Pete Shelley wrote perfect three-minute pop songs. The soundtrack to being a teenager,” tweeted The Charlatans’ Tim Burgess yesterday. Of any age, he could have added.