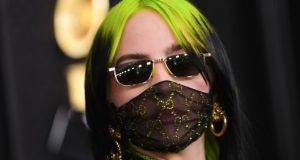 In a request filed in LA county court, Eilish (19), said a man (23) had been camping outside a school across the road from the family residence. File photograph: Valerie Macon/AFP/Getty Images

Billie Eilish has been granted a restraining order against an alleged stalker who she says camps outside her family home in Los Angeles and throws “extremely disturbing” letters on to their property, according to documents obtained by NBC News.

In a request filed in LA county court, Eilish (19), said that 23-year-old John Hearle had been camping outside a school across the road from the family residence and “perching” on the school’s fence to look into her home. She said Hearle had harassed and threatened her, making a throat-slitting gesture when he sees her.

His presence, she wrote, had caused her “emotional injury including fear for my safety, fear for the safety of my family, and loss of my sense of peace and tranquillity and security in my home and personal space resulting from the repeated instances of harassment”.

Eilish wrote: “I no longer feel safe going outside my home and enjoying basic physical exercise in my neighbourhood, as he could attempt to approach and hurt me . . . Every time I see him I just want to scream.”

The Guardian has contacted representatives of Eilish for comment.

In June 2020, a judge extended to three years a restraining order against Prenell Rousseau after he visited Eilish’s home seven times, showing “erratic behaviour”, including sitting on the porch to read a book after Eilish’s father told him that she wasn’t home.

The order prohibits Rousseau from attempting to contact or coming within 100m of Eilish and her parents, from harassing the family or visiting Eilish’s workplaces. As a result, Google blurred Eilish’s family home from Street View. – Guardian