Bell X1: On getting back to basics

We caught up with BELLX1 in Dublin's Tower Cafe as they celebrate the launch of their sixth album 'Chop Chop' today. And they've got a cool tilt-shift video to boot. 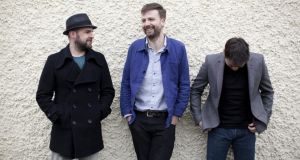 It takes some bands a lifetime to come full circle and decide that they want to get back to basics. For Bell X1, it took 13 years. The story of the Kildare band’s sixth studio album begins in a nondescript garage attached to the house of guitarist Dave Geraghty, which now acts as a base for their musical endeavours.

It was here that they recorded 16 demo tracks last summer, nine of which would go on to become Chop Chop, the band’s leanest, tightest and most interesting album in years. The most striking first impression is that it mostly foregoes the noodly electronics that have informed much of the trio’s recent material.

“I suppose we just felt that we’d exhausted that stuff,” says Noonan . “And as a writer, I felt that my strength was more in traditional songwriting on a piano or a guitar, as opposed to electronics. I’d done a lot of programming on the last couple of records and it was good fun, but I don’t think it’s a strength.

“ So it was just the three of us going back to piano-based or guitar-based songs. Dave and I worked on stuff separately and brought them up to a pre-finished song structure, as opposed to a beat coming off a laptop with some idea sketched over it. There was something really refreshing about shrinking the palette.”

“It was kind of an accident that we had the songs and started recording and making demos in this garage studio,” adds Geraghty. “We realised, ‘Actually, this sounds really good; we can use fewer elements, but make it much bigger’. Those kind of details, like on an old Sam Cooke recording . . . you hear the honesty and heartbeat of the song, rather than it being overcrowded just because you want to make it contemporary. Or maybe it’s just because I’m getting old? ‘Enough of all that thump-thump music there, now!”

The desire to back an intimate album that sounded big led the trio to Bridgeport, Connecticut, the sleepy town where renowned US producer Peter Katis operates his famed Tarquin Studios. When the opportunity to work with the man known for cutting records by The National, Interpol and Jónsi arose, the trio eagerly grabbed it. Sharing a production credit with Katis on Chop Chop is Thomas Bartlett, aka Doveman, a member of trad supergroup The Gloaming who has also been a session and touring player with the likes of Antony and the Johnsons to The National.

“We sent demos around to a few people, and Peter loved them and was really into doing the record,” explains Noonan. “We really wanted Thomas to be involved, especially seeing what he brought to The Gloaming. We were all only available for this two-week period in January, so we got our skates on and made it happen.”

The plan, the pair explain, was originally to record two albums in quick succession. They’ve temporarily abandoned that plan, but the resultant album is a tidy 33-minute-long collection of beautifully simple songs that rely on subtle orchestration – a soulful parp of brass here, a flourish of strings there – to create mood and fill out the recordings.

Still, for all the sombre atmospherics such as album highlight Diorama, there are several upbeat numbers that will keep the old guard content. Katis and Bartlett played to Bell X1’s strengths without diminishing their established sound, says Noonan.

“Peter was kind of the structure, and Thomas was running around with the bows and the frilly stuff, finessing it,” he laughs. “It’s the vaguest of terms, ‘producer’. I’m never quite sure what it means. A lot of it, for me, is keeping the mood buoyant and keeping momentum, and often sifting through the ideas that might be floating around and saying no. Most of what Peter brought was an immediacy. His method was a propelling factor how the record was made so quickly, and also how good we were feeling about it as it went.”

Was it always the plan to have such a short album? “Well, that’s the age we live in now, isn’t it? Everything’s so disposable,” shrugs Geraghty. “You’re expected as a band to come out with stuff more frequently. And that’s fair enough – I’m fine with making more ‘music babies’, that’s my favourite part of it! If you’re not trying to do this triple-gatefold album, then make it shorter and be more prolific with releases. You never know, we could be talking here again in a year’s time. ‘Chop-chop, OK, next!’”

“I think it was definitely the mentality of Chop Chop – that you’d trim away any excess. In the past, we’ve often not been able to help ourselves; we get some moments that we go on a bit,” says Noonan, smiling. “I’ve often thought of the Motown era, where you’d have great records, and great playing, and great songs that were two-and-a-half minutes long and they’d feel like complete songs that had a proper emotional journey. That’s a skill that’s not as well-practised these days, I think.”

Unlike most of their previous albums, there is no overarching lyrical theme that defines Chop Chop, says Noonan, although both songwriters becoming fathers in recent years has had some effect. “I think it has,” he nods, “but more so on the last record, because it was still so fresh and I was still a bit dizzy from it. The title referenced this idea of momentous change, but not in very overt ways; change by stealth, almost. But otherwise, I don’t think so. It’s definitely affected the workings of the band – we’ve got to be a lot more structured in terms of how we spend our time. When we do rehearse in the studio, we do tend to start a lot earlier and finish a lot earlier – no more all-nighters. Not in the music world, anyway.”

Despite the changes in their personal lives, however, they agree that they are still hungry for success after 13 years of Bell X1. In recent years, they have undertaken several tours of the US, slowly building a fanbase and occasionally catching fleeting glimpses of the ‘big time’ by playing primetime shows such as the Late Show with David Letterman.

“I’m happy that it’s growing in a very organic, honest way; that people are finding out in a way that – not to be terribly cheesy about it – is bringing us closer to their hearts,” says Geraghty of their slow-burning Stateside strategy. “They’re actually saying, ‘this is a band that I’m going to invest in’; they’re in it for the long-haul, rather than punching us in the face with competitive radio play. Yes, it’s a slow process, but it’s a solid one - and it’s that solid foundation that’s allowing us to go back and tour again and again. And every time we do, there’s obvious signs of it growing and getting bigger. I think as long as we’re making a living out of it and remaining creatively challenged, long may that slow growth continue. But if we were to get a big radio hit in America,” he says, raising an eyebrow, “I wouldn’t complain, either.”

But the American conquest may have to wait, as both Noonan and Geraghty plan solo releases at some point next year. Noonan’s debut is an album of boy/girl duets featuring the likes of Martha Wainwright and Gemma Hayes – inspired, he says, by country-folk singer Gillian Welch’s simplistic approach. Geraghty is tipping away at his third solo record in his garage studio. Do their pursuits outside of Bell X1 help to keep the flame burning after playing together for so long?

“Well, our college qualifications are obsolete at this stage, so we’re past the point of no return,” deadpans Geraghty, “so I suppose we’ll keep banging our head on the wall until something gives.”

I point out that during their decade-plus history, they have led remarkably clean-living lives as members of one of Ireland’s biggest bands. No tabloid scandals? No skeletons in the closet?

“Yeah, there’s not enough dysfunction! That’s our problem,” laughs Noonan, draining his coffee cup and stretching his long limbs. “More dysfunction, that’s what we need! We’ve never really had a career plan or long-term vision; we usually just bumble from one record to the next. And we’ve never really had a ‘story’, as such, in the ‘my drink and drugs hell’ sort of way. I’ve sort of felt inadequate in that respect,” he chuckles. “We’re just dudes making good music. Or trying to, at the very least.”