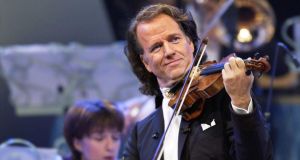 André Rieu, the Maestro of the Masses (New York Times), a Weapon of Mass Happiness (The Spectator), and the best-selling classical musician on the planet, insists that music has magical and healing powers. He sees it all the time at his concerts. He sees laughter. He sees kissing. He sees joyful weeping. He even sees miracles.

“You know I’m so proud when I’m on stage and I see all these happy faces,” he says. “That’s what makes me happy. We come on stage at 8pm and let’s say at 10.30pm the encore starts. And by then the audience are in the mood and they don’t want to stop. They don’t want to go home. So we do a 45-minute encore. And that’s when people get up from their wheelchairs and throw away their sticks and say: Come on, let’s dance.”

At this point, one ought to demand photographic evidence or at least raise an eyebrow, but you might as well start swearing at him in Kazakh. (One of the few languages he doesn’t speak). André Léon Marie Nicolas Rieu doesn’t do cynicism. A warm, perennially-smiling presence, he’s careful to use your name and he responds to all efforts to find a chink of darkness in his persona with peals of laughter.

“I’m sitting here smiling now right now,” he says. “Journalists and politicians say we live in a cynical world but I don’t believe that we live in a cynical world. We live in a fantastic world. It’s getting better and better and better all the time. For me, the glass is always half full. That’s the way I look at things. I think when people come to my concerts they enjoy not only the music but the happiness we share with each other. And I don’t think it’s the case that they come to my concerts and experience joy for three hours and then go back to misery. I can’t believe that.”

One-off big-screen music events – either live streamed from the Royal Opera or from the moshpit of a Metallica concert – have been a huge draw for cinemas over the past decade. And no artist has scared up more movie trade than André Rieu. The film of his 2018 Maastricht concert – Amore, My Tribute to Love – grossed £1.67 million over two weekends in Britain and Ireland, breaking the previous box office record held by, well, André Rieu. His 2019 summer concert outpaced its predecessor. And 70 Years Young, a one-off concert to mark his 70th birthday in early January, looks certain to repeat the trick.

“My sons came with this idea 10 years ago,” recalls Rieu. “They said we’re going to do the concerts in a cinema. And I said: what? But it’s incredible, I hear stories about people in the cinema dancing and singing and clapping. And it’s amazing to think that there are people in cinemas all over the world enjoying themselves as if they were at the live concerts.”

We shouldn’t be surprised that Rieu is a box office sensation. In an era when, we are told, nobody sells DVDs and CDs anymore, Rieu has sold more than 40 million of them. Last year, the Dutch violinist and conductor sold more than 700,000 tickets to his concerts, bringing in $55.9 million (€50.6m) from 71 shows. It’s an impressive haul for someone who has seldom been the beneficiary of media hype.

Writing this newspaper in 2013, Donald Clarke claimed, among other things, that Rieu “essays a class of decaffeinated classical music that makes Richard Clayderman seem like Karlheinz Stockhausen”. Even the Daily Mail, an imprint that can usually be relied upon to treasure the accessible, traditional aesthetic favoured by Rieu, uses backhanded phrases as “ladies of a certain age” when describing his fanbase.

Rieu is never bitter toward his critics. In 2016, he told the New York Times that he regarded the “schmaltz” tag as complimentary.

“I see a lot of jealousy around me,” he says, cheerfully as ever. “People say: Oh my God, he plays waltzes. And the money is coming in. But you have to realise it’s a lot of hard work too. I have a friend who says: you are not lucky; you work so hard that’s what makes the luck for you. I think that’s a very nice way to say it.”

Even within classical circles – perhaps especially within classical circles – Rieu cuts a divisive figure. A 2009 thread on the Dutch impresario at TalkClassical.com contained such eye-watering (and uncharacteristic) jabs as “scum of the earth”. He’s not interested in the canon. When he famously led several thousand Ajax fans in a sing-along of Shostakovich’s little-known Waltz No 2, during the 1995 Champions League semi-final against Bayern Munich, it marked a rare foray into Russian composition for an artist who unabashedly prefers Johann Strauss and the theme from Titanic to Richard Wagner.

“You know, I don’t see the difference between classical music and other music.” says Rieu. “Some people are very strict. They say: no that’s not classical music. Even in pop music you hear: no, that’s not pop music. For me there are no borders in music. There’s only good music and bad music. Good music is music that touches my heart. And I know that if it touches my heart, and I’m emotional about it, I’m 100 per cent sure that my audience will have the same feeling. I follow my heart and nothing else. And it seems I have a gift. Because what my heart tells me to play works. It turns out there are a lot of people with my heart.”

His heart has enough business nous to have gifted him a fairytale. Rieu lives in a 17th-century chateau with 27 bedrooms and a butterfly house. Its previous owner was Charles de Batz-Castelmore d’Artagnan – the inspiration for Alexandre Dumas’s musketeer, who died at the siege of Maastricht in 1673. The city is Rieu’s hometown and he’s not going anywhere.

He plays a 1667 Stradivarius violin, one of only 400 such instruments in the world, “a magical object” he says, that sounds warm like Maria Callas.

His family life is idyllic. Marjorie Rieu, his wife of almost 45 years, is his long-time business partner. Their son Pierre is the vice-president of André Rieu Productions. And he gushes about the Johann Strauss Orchestra, which he founded in 1987, as his second family.

“Marjorie and Pierre and me run the whole thing,” says Rieu. “We have a very small organisation around us who organise the hotels and the flights and getting the sets around the world. We don’t have a manager overseeing what we do and looking after the money. I have 120 people on my payroll and most of them are with me for more than 35 years. So I think they like me as a boss.”

Rieu’s father was conductor of the Maastricht Symphony Orchestra. The third of six children, André was encouraged by his mother at the age of five to take up violin. He studied the instrument at the Royal Conservatory of Liège and at the Conservatorium Maastricht, where a rapturous response to a university performance of the Gold And Silver Waltz by Franz Lehár schooled him in the romance of three-quarter time.

His waltz-dependent tours are invariably spectacular. In 2008, he enjoyed performing in front of the Schönbrunn Palace in Vienna so much that he decided to build a full-scale replica for his upcoming world tour, replete with fountains, an ice rink, a ballroom full of dancers, a state carriage covered in gold, pipers, and real champagne for all. By the time he returned from Australia, he was €34 million in debt. That ought to have satisfied his most vitriolic critics, but, in keeping with Rieu-brand magic, he bounced back. The publicity from his bankruptcy allowed him to sell out all of his 2009 concerts, and he went into 2010 with a $20 million profit.

“I was crazy and we made a copy of the Schönbrunn Palace in Vienna,” he recalls. “And we toured the world with it. And we calculated that we would need 500 people for five days to build this thing and I don’t know why but we always assembled it in two days. This is true of my whole life. The music starts and people see the lights and suddenly they are so happy. And there’s a positive mentality. And with that kind of positive mentality, I think we can change the world.”

If Rieu is harbouring any darkness, then he’s a very good actor indeed. Anyone else would at least have the good grace to complain about sore cheeks from all that smiling. But not André Rieu.

“That is a question that people very often ask me.” he says. “Even people in my own orchestra. I can tell you that if we were to force ourselves to enjoy the shows or force ourselves to smile, the audience would immediately know it was theatre. What we do is completely honest. I am what you see on stage and what you hear on stage.”