Opinion: To get the full André Rieu experience, you have to nail yourself to the chair 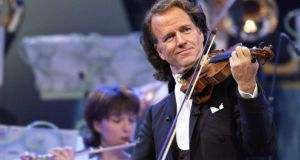 An awful reign of terror is finally drawing to a close. For the last two weeks, André Rieu, mullet-headed Dutch waltz-strangler, has had exclusive control of the Sky Arts 2 channel. So total is his domination that the station has actually been renamed Sky Arts Rieu.

What’s the problem? If you are lucky enough to have that channel then you almost certainly have access to a further 100 sources of televisual diversion. It’s not 1978; you’re not stubbornly watching Mart and Market because the only other alternative is to go outside and kick a stupid ball (or do something else that doesn’t involve lovely telly). Enjoy the Nigerian evangelists. Glance at Angling with Vanilla Ice .


Hypnotically grotesque
Here’s the thing. Sky Arts Rieu has, for this writer, taken on the quality of a scab that needs to be repeatedly picked. The Rieu experience is so hypnotically grotesque that life without it seems pale and underpowered. André and I are trapped in a co-dependent abusive relationship.

He tortures me with his ruthless desecrations of Mozart. I scream vile abuse at his unrelentingly smug face. Only one of us is making millions from the exchange.


Decaffeinated music
By all accounts a gifted violinist, Rieu, working with an orchestra of millions, essays a class of decaffeinated classical music that makes Richard Clayderman seem like Karlheinz Stockhausen.

All rough edges are chiselled away. Long-form orchestral sweep is jettisoned for the class of instant, gooey comfort that one expects from a Creme Egg or a vodka jelly shot (without the vodka).

Mind you, the sound of Mr Rieu’s records, like all such muzak, offers no jarring challenges to the psyche. You could occupy a hundred lifts or spend a thousand hours on hold without ever realising it had entered your ear. To get the full experience, you have to nail yourself to the chair, swallow anti-nausea medication and fix your eyes upon one of his live performances.

The men in the orchestra get off lightly: eveningwear that would pass muster at the Berlin Philharmonic. The women are, however, asked to don outrageously flouncy dresses that appear composed of equal parts vomit, candy floss and Angel Delight. Welcome to My Big Fat Gypsy Wedding: the Stage Event .

Sky Arts Rieu confirmed that André was attempting to summon up a Ruritanian NeverWas by sending a fawning journalist to his (no really) medieval castle on the outskirts of Maastricht.

Standing proudly beneath an appalling painting of himself – apparently perpetrated by the artists who once worked for Woolworth’s – Rieu calmly fielded criticisms that he was anything less than a maestro for the ages. You know how these things go. The classical music establishment is composed of snobs. How can you argue with a billion in record sales? And so on.

“Critics and musicians who attack me are jealous of my success and the fact that I make people happy,” he has said. It should be noted this is the sort of argument teenage Justin Bieber fans use when anybody dares to question that warbling chipmunk’s talent or pulchritude. “Your just jelous, lol!”

It just won’t wash. Speaking for one critic, I may or may not envy the success of, say, David Bowie or Simon Rattle, but I don’t run around calling either a pumped-up, vulgar megalomaniac with the aesthetic sensibilities of a Floridian drug baron.

It is, however, hard to entirely dismiss the musician’s defence of himself. Confronted with something so overpoweringly ghastly as a Rieu concert, certain observers could find themselves questioning the democratic notion that art appreciation is a subjective business.

Identifying it as ordure is akin to classifying sodium hydroxide as an alkali. It just is.

And yet. This is not science. If hugely intelligent alien lizards descended to earth they may well prefer Daniel Barenboim to André Rieu, but, most likely, only because Dan tasted better when they locked their hungry jaws around his nourishing head.

In a few millennia all this culture will be meaningless dust. Until then, the bouncing masses at a Rieu concert have as much right to savour his saccharine melodies as I do to make theatrical gagging noises.