Gig of the Week: Dermot Kennedy in Dublin 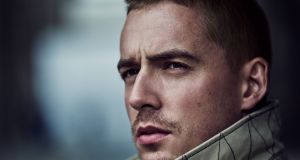 From underage open mic nights more than 10 years ago to selling out two shows next week at Dublin’s 3Arena, Dermot Kennedy is the antithesis of what some call an overnight sensation. Indeed, up to four years ago, the songwriter was barely on the radar.

Making a crust busking on the streets of Dublin, his first piece of luck – borne out of his own determination – was getting a nod of approval from Glen Hansard. The occasion was the annual all-star Christmas Eve busk-fest on Grafton Street, where the likes of Bono, Hozier, Hansard and a few other very well-known Irish singers banged out tunes to raise money for the homeless.

Several years ago, Kennedy, guitar in hand, sidled up to Hansard – something of a musical touchstone for him – stubbornly held his ground, and impressed him with a version of Bob Dylan’s You Ain’t Goin’ Nowhere. Nothing much happened for a while after that apart from more busking and forming a work-in-progress band, but Kennedy then split from the band to try a solo route.

Gradually, the songs filtered out, his previous studiously established singer-songwriter approaches altering as he developed interests in production techniques. Working with UK producer Carey Willetts (formerly of the band Athlete), acoustic songs were edged with electronics and hip-hop beats. Such treatments bounced his lyrics to front of house, fusing the generally serious nature of the words with an urban music aesthetic.

Kennedy’s 2017 EP, Doves & Ravens, on which he took this musical approach further by working with Stephen Kozmeniuk and Charlie Hugall (producers for the likes of Florence + Machine, Nicki Minaj, Lykke Li, Dua Lipa, Madonna, and Kendrick Lamar), propelled songs such as Glory, Boston, and All My Friends. From there on in, you could sense that Kennedy would be leaving his busking days behind him.

The style was sincere and unsentimental (Bon Iver, David Gray) mixed with R&B sensibilities (Drake, Kanye West). Around the same timeframe, however, his songs landed on Spotify Discover Weekly. Cue multiple millions of streams, inevitable music industry interest, signing a major record deal, and – wisely – making sure that live gigs provided the one thing that streaming services couldn’t: the human touch. If the music slathered over the bones of Kennedy’s songs provides the head sways, then it is his emotionally driven lyrics – shaped from real life – that provide the empathetic sighs and communal singalongs, of which you don’t get many on Spotify.

Last year, Kennedy made the BBC’s Sound of 2019 longlist, but industry observers didn’t need signifiers such as these to tell them that the man was well on his way to becoming a major international pop star. The release over two months ago of his debut album, Without Fear, easily consolidated this. Topping the album charts in Ireland and the UK means little these days, but reaching the Top 20 in the US and Canada is a different story altogether. Bye-bye busking, hello big time. Speaking of which…

If you don’t have a ticket for these forthcoming 3Arena shows, then you can kiss farewell to getting a seat. And – unless Santa springs a pleasant surprise on you – if you don’t have tickets for Kennedy’s 2020 sold-out open-air shows at Malahide Castle, Dublin (June 26th) and Irish Independent Park, Cork (June 27th), then you can say goodbye to those, too.

Hold on, though – did we really say bye-bye busking? Yes, well, maybe… What’s the betting that Kennedy will now join the ranks of the famous musical chuggers in Grafton Street on Christmas Eve? You’d stake the house on that happening, wouldn’t you?

Is there an answer to ‘the ultimate meaning’ of life?
9