The Gloaming announce concert series at NCH in March 2019 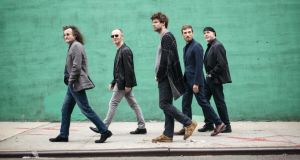 The Gloaming will play seven dates at the National Concert Hall in March 2019, their only Irish performances next year. The traditional-music supergroup will return to Dublin for a seven-night residency on March 4th, 5th, 6th, 7th, 9th, 10th and 11th.

Since their formation, in 2011, The Gloaming have sold out an unprecedented 24 consecutive concerts at the NCH, celebrated a number-one album, won a BBC Radio 2 Folk Award and the Meteor Choice Music Prize for album of the year, performed to packed houses in some of the world’s most prestigious venues, and topped multiple performance-of-the-year polls.

Earlier this year the band released the critically acclaimed album Live at the NCH, which captured the spirit of their performances at the venue. They are currently working on their third studio album, which has an anticipated release date of spring 2019. The concerts in March are likely to showcase this new material.

Ever since they formed there has been a question about how long the band can sustain their alchemy, given the different backgrounds, interests and projects of the five members, Iarla Ó Lionáird, Caoimhín Ó Raghallaigh, Martin Hayes, Dennis Cahill and Thomas Bartlett. Today’s announcement confirms that they can extend it at least into next year.