Micheál Martin wants us to have ‘a meaningful Christmas’ – but what does that mean?

Unthinkable: Perhaps existentialism can help us navigate the Taoiseach’s suggestion 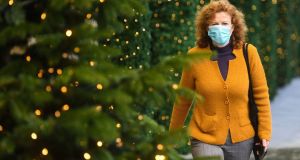 People don’t have to be ‘going on the lash’ to celebrate Christmas meaningfully, the Taoiseach says. Photograph: Kirsty O’Connor/PA Wire

What is the appropriate seasonal salutation in a pandemic? Wishing others a “merry Christmas” seems irresponsible at a time when public health experts are warning against lax behaviour around alcohol consumption. Invoking “safe” holidays sounds altogether dull.

It’s not surprising, then, that Taoiseach Micheál Martin has introduced the concept of “a meaningful Christmas” in recent statements. As the Government reflects on the best measures to control the spread of Covid-19, he has said people don’t have to be “going on the lash” to mark the occasion meaningfully.

Of course, one person’s idea of “meaningful” is very different to another’s. To try to understand what it amounts to in practice, we have turned to Jennifer Anna Gosetti-Ferencei, an expert in existentialism – that branch of philosophy obsessed with the meaning of life. (Or, more precisely, meaning in life. No self-respecting existentialist would imagine there is a single answer to life, the universe and everything.)

In a lively and engaging new book published this month, Gosetti-Ferencei, a philosophy professor at Johns Hopkins University in Baltimore, Maryland, explores the subject through the eyes of famous existentialists such as Jean-Paul Sartre, Albert Camus and the poet Rainer Maria Rilke.

None of these thinkers provides straightforward answers. Moreover, according to existentialist logic, “we cannot look to the lives of the philosophers as models by which to shape our own”, Gosetti-Ferencei writes in On Being and Becoming: An Existential Approach to Life (Oxford University Press).

However, they can help us to navigate the question of what’s “meaningful”, as she explains further.

Existentialists tell us we can make up our own meaning of life, but they are annoyingly vague about how exactly this can be done. What practical guidance do they give?

Jennifer Anna Gosetti-Ferencei: “Existentialism suggests that we are right to look for – or even invent – meaning rather than accepting all the ready-made answers offered to us in our world. This will be frustrating to anyone looking for a straightforward solution. But we can find some guidance in the existentialist emphasis on how life is concretely lived and experienced, and in each individual’s unique relation to the world.

“Existentialists emphasise participation. Meaning won’t be found in taking from the world to fill up any emptiness we may feel inside, but it will be generated in actions that give to some aspect of the world your interest and effort, your emotional energy, your intellect, your labour or your time.

“In light of this, you can start by asking yourself: What activities, relationships, ideas, aspects of the world do you actually experience as satisfying?... How can your interest or imagination be realised in your experience or your projects, in your participation in the world? Ask such questions, follow them up and be willing to explore where they lead.”

A criticism of existentialism is that it’s rather self-indulgent. Is there some truth to that as it seems to be more concerned with the individual than the collective?

“Some other philosophers prioritise a duty to others over and above the self, or promote an ethical system to which the individual’s needs must be subordinated... They all promoted interaction with the world, or engagement of something other than themselves.

“Existentialism is in some respects very demanding, rather than indulgent, of the individual. And when it attends to serious suffering of the individual, it does not so much brood on the inner life as dignify this suffering as something common to all humanity.”

Some of the existentialists seemed to view themselves in the mode of “the great man”: Nietzsche above all but also, arguably, the likes of Sartre, Camus and Rilke. The latter two, you point out, were notoriously poor husbands. Was there a bias among the existentialists to see “meaning” in shaping history or creating works of art rather than, say, domestic life?

“It may be true of many philosophers and writers that they tend to be preoccupied with their own ambitions rather than the everyday details of domestic life. But this is likely to be true as well of many who have achieved significance in any field of life: explorers, scientists, entrepreneurs, artists, inventors and so on.

“Nietzsche thematised the idea of greatness and valued creativity, and Sartre was disdainful of conventional domestic arrangements. These philosophers were invested in everyday experiences in their own ways - in friendships, love relations, music, current events, for example, all of which fed their thinking.

“Although he did not follow a conventional path, Rilke did sometimes write about everyday situations with reverence. Gabriel Marcel, a contemporary of Sartre, associated conventional family life with the most meaningful existential commitment one can achieve.

“Here’s another way to look at it: philosophers and poets may have felt a sense of importance addressing what they took to be a universal human condition. But that condition would belong to each and all of us. From an existentialist point of view every situation of life is worthy of contemplating.”

Lockdowns to combat the pandemic have meant people are prevented from doing activities they normally find deeply meaningful. How would existentialists advise us to respond to this situation?

“It is undoubtedly challenging for many of us to have to live without the ordinary activities and connections that make life feel worthwhile. It may be possible within these unusual constraints to find new sources of satisfaction, and this may require some exploration and a willingness to try new things or to think about one’s life in a new way.

“Existentialists were not immune to real-world suffering – many lived through two world wars. They may advise that is important to try to identify whatever options one may have within the situation into which one is thrown, to be unafraid to think about oneself and one’s life in new ways, and to acknowledge the freedom one does have to commit to a new path.”

The fourth instalment of the Irish Young Philosopher Awards was launched last week by Senator Alice Mary Higgins on World Philosophy Day. Having already expanded from the Republic to Northern Ireland, the event is now going global with an extra international award for overseas entries. Across all categories, second-level students and fifth- and sixth-class primary pupils are eligible to apply.