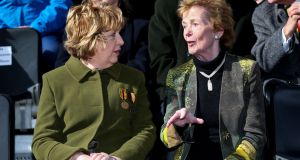 Former president Mary McAleese has said her “heart went out” to Mary Robinson over the 2018 controversy surrounding Princess Latifa of Dubai.

Mary Robinson – also a former president of Ireland – drew criticism at the time after being reportedly “misled” into vouching for the safety of Sheikha Latifa bint Mohammed Al Maktoum, a daughter of Dubai’s ruler Sheikh Mohammed bin Rashid Al Maktoum. Many believe the princess is being held against her will in Dubai.

More recently, Robinson said that her role in the affair had been “the biggest mistake” of her life and that she had been naive.

“My heart also goes out to that young woman,” said McAleese. “We still don’t know what happened to [Latifah], and that’s the tragedy.”

McAleese spoke on a range of subjects to Róisín Ingle at an online event, The Irish Times Women’s Podcast Big Night In, on Saturday night.

“The Catholic Church is the biggest NGO in the world, bar none. Sixteen per cent of the world’s population belongs to the Roman Catholic tradition. It is hugely influential. It’s an enormous edifice.”

McAleese continued: “Do I think that this edifice that we see today is what Christ intended when he created the church? No, I absolutely do not.” Do I think that he left instructions for a hierarchical structure that would exclude in perpetuity the decision making power of women? No, I don’t.

“We would never have heard about [what we’ve learned of] Mother and Baby homes, had we been depending on the church telling us,” McAleese added. “Most of this information came out through the secular world, and came out through government or [though] NGOs or victim support groups and through the victims who dared to speak. And eventually they were able to gather the wherewithal to take on the church, to force open its doors, and to change its structures. And so I can’t walk away for this reason.”

In 1999, the then-President had a private audience in the Vatican with Pope John Paul II. She was accompanied by her husband, Martin.

“After a while, I said to the [Pope’s] young interpreter, ‘before we start to have a serious discussion, I want to refer to … the joke. I don’t think he would have said that to a man … and I’d also like him to consider apologising,” McAleese continued. “I remember the young man mentally going, ‘do I really have to say that to the Pope?’, But he did, because the Pope suddenly became so apologetic.”

McAleese also shared her memories of growing up in the Ardoyne area of Belfast, as part of a Catholic family living on “the Protestant side” of the street: “Every day somebody died, and very often it was someone you knew.”

In 1972, her family home was targeted by loyalists. “I was actually able to work out who had tried to kill us,” McAleese said. “They came first of all with bricks … which was terrifying. And then a short time later, one of the people involved in that night came back with a friend – they belonged to the loyalist paramilitary organisation and came with two machine guns. And they emptied the contents of the machine guns through the windows.

“A group then attacked my brother John, who is profoundly deaf, as he came home from Deaf Club. These things all happened within a condensed period of time, around 1971-2.

“[John’s] physical scars are still visible, but the emotional scars were just devastating for all of us.”

After graduating with a law degree from Queen’s University Belfast, she later became a professor of criminal law and criminology at Trinity College Dublin. She also worked as a journalist in RTÉ.

She recalled of her media job: “It wasn’t the happiest time of my life. I worked there for two years, and one of them wasn’t very happy. I worked in current affairs, with people I really respected and liked. [The programme Frontline] gave way to an edgier programme called Today Tonight which, in terms of his coverage of the North, was just awful.

“They didn’t seem to know much about the North and didn’t seem to be terribly interested in it, and seemed to get it wrong so often. That hurt me deeply, as someone who knew the North very well.”

Speaking about the prospect of a united Ireland, McAleese added: “Well, partition has not been good for the island. It was never intended to be permanent. If we were to have a united Ireland, by which I mean a reconciled Ireland, and are comfortable with that new arrangement, it would take a lot of generosity on all sides and a lot of lateral thinking … I think we’re quite capable of coming up with something that is spectacularly brilliant.

“I’d love it to be in my lifetime,” she said. “I’d love to have that debate and for that debate to be gentle and courteous and respectful.”

The Women’s Podcast Big Night In, featuring Róisín Ingle in conversation with one of six influential women in front of a live audience, takes place online every fortnight until May 15th. Future interviewees include Joanne O’Riordan, Dr Aoibhinn Ní Shúilleabháin, Tolü Makay and Maeve Higgins. A €50 ticket (€25 for Irish Times digital subscribers) gives access to all six events. Details and tickets from https://www.irishtimes.com/big-night-in.