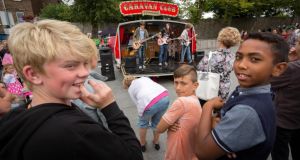 Leon Walsh Vaughan, Kemal Souleyman and Zach Bay Hammond watch Kojak perform at the Caravan Club Extravaganza as part of the AKA in Kilkenny over the weekend. Photograph: Dylan Vaughan

A couple of days at the Kilkenny Arts Festival can be akin to a close encounter with mind-altering substances.

Want to change the way you see the world? No problem. Just get your head into one of Anna Cleary and Dennis Connolly’s Meta-Perceptual Helmets at Rothe House.

After allowing your eyes to adjust for a second, you’ll be able to see what a chameleon sees – backwards and forwards at the same time.

Want to believe in heaven? Well, that’s a little trickier. But after attending Saturday night’s performance of Bach’s gigantic Mass in B Minor by Chamber Choir Ireland and Camerata Kilkenny, there were plenty of folks floating down the steps from St Canice’s Cathedral in a state of musical, if not necessarily spiritual, bliss.

None of this came as a surprise to Kilkenny’s artistic director, Eugene Downes.

“People are going on a journey – whether they’ve come for a day, or a weekend, or have booked for the whole festival,” he told The Irish Times.

For him, the key to a first-rate arts festival is the layering of artistic experiences over a period of days as one event resonates against, and plays off, another.

“It’s a special equation and, of course, it’s inherently unpredictable, which is what makes it so much fun,” he said.

In a city alive with summer visitors and buzzing with anticipation over yesterday’s All-Ireland hurling semi-final at Croke Park, it was easy to forget that festival time represents a season of serious hard work in Kilkenny.

Every year, an army of well-drilled festival volunteers ensures that entries and exits to events are smooth and efficient.

Around the medieval streets, pop-up exhibitions in dozens of spaces attest to the festival’s increasing importance to the livelihood of local painters, potters, photographers and jewellery-makers.

Arguably, working harder than most this year is the festival’s painter-in-residence, Mick O’Dea, whose temporary studio at James Stephens Barracks has already produced proper full-length studies of the theatre director Garry Hynes, the singer Iarla Ó Lionáird – and yesterday’s subject, the actor Barry McGovern, whose portrait emerged from the canvas, somewhat unnervingly, as the audience watched.

O’Dea is unfazed by the need for speed. “I’m impatient anyway, so it suits me,” he said. And the project has, he confessed with a grin, allowed him to nab a subject he’s been trying to get hold of for years – his second cousin, the traditional fiddle virtuoso Martin Hayes.

The Kilkenny festival continues until next Sunday.