Is the Irish media devoid of intellectual depth?

‘We need to see that there are different ways of looking at the world to that served to us by the mass media, which is necessarily pretty banal,’ argues Desmond Fennell 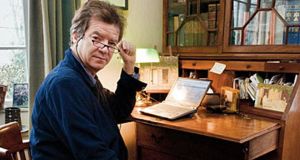 There was a time when people across Ireland turned on the television on a Friday night to watch a Dominican priest with arthritis talk about philosophy. I’m thinking of Fr Fergal O’Connor, who was a regular panellist on The Late Late Show and also introduced generations of UCD undergraduates – myself included – to Plato’s Cave.

Check out this evening’s schedule and you might find it hard not to conclude that television has dumbed down. But there is a broader malaise in the mass media, newspapers included. As outlets compete for a fragmented audience, the scope for collective debate on serious, fundamental issues diminishes.

Is the media doing enough to facilitate an intellectual life in Ireland?

To author and critic Desmond Fennell, the answer is obvious. His latest book Third Stroke Did It: The Staggered End of European Civilisation is the culmination of 50 years of philosophising. In that time he has championed many political causes. Today, he says, he’s no longer a reformer; rather, he simply tries to describe the world as it is. Thus, he provides today’s idea: Thinking is not regarded as an important component of Irish society.

You’re often described as an intellectual. Is that a compliment?

Desmond Fennell: “Not necessarily. For the general public, an intellectual is someone who has read a lot of books and has a lot of ideas and consorts with other similar people, and is of no relevance to the practical affairs of the country.”

Does Ireland have an anti-intellectual culture then? “I would call

it more an anti-philosophy mindset. People in general regard philosophy as being a bit airy-fairy, and about abstract things which, again, have nothing to do with the practical life of people.

“Since then, we have in universities quite a number of Catholic or post-Catholic philosophers, and they are simply ignored by the culture at large. If you look at the work of Irish philosophers – Richard Kearney, Philip Pettit, William Desmond – they are never noticed in the Irish public scene, never reviewed, never discussed. So in that sense, Irish criticism is a very poor thing; it is confined to the unreal world, namely fiction.”

Why should that matter?

“Philosophers contribute something different to the standard view of man in the world presented by the rulers and the doctrinal establishment, the people who through the media give a standard view of things.

“Philosophers have no vested interest. They are only interested in the truth. They take note of the wisdom of the ages. They differ from each other, they debate with one another; that is a valuable contribution. Not that we need to agree with any of them, but we need to see that there are diversities of view, and different ways of looking at the world to that served to us by the mass media, which on the whole is necessarily pretty banal.”

And this differs from other European countries?

“Of course. The Irish philosophers publish abroad, and they get debated abroad. An aspect of our ignoring of ideas is that we haven’t a journal of ideas, not one. We haven’t had one since the Crane Bag, which folded in the 1980s. So there is no place where, on a level suitable for the general public, ideas are discussed and clash with each other as people debate. It is almost incredible by European and American standards.”

What is to blame? Lack of curiosity in Ireland, self-censorship, or simply Ireland’s small size?

“Naturally, those who engage in philosophical ideas will always be a minority in every country but they are an influential minority. Maybe it’s an old influence of the colonised situation; we thought only the Anglo-Irish had the proper status and minds to deal with these big questions of humanity; there is this feeling with the general public now, either Catholic or post-Catholic, they may feel they haven’t the right to [philosophise].

“I applied once for the job of arts critic at The Irish Times, and one of the interviewers said to me: ‘The trouble is, Des, we’re afraid you’d bring your philosophy into it.’ That expressed in a nutshell a broad attitude to philosophical thinking. They gave me the job on trial but my subsequent review of a living art exhibition was ‘unorthodox’ and the paper did not make the job permanent. I must have philosophised.”

What would support an intellectual life in Ireland? Should the State get involved?

“It really begins with the mass media. If the mass media ignore what the philosophers are saying, then obviously it can’t penetrate to the culture at large.

“I wouldn’t for a moment suggest that the State should have anything to do with this. But the State is guilty. Take Aosdána. It doesn’t allow philosophers. Writers about the real world are excluded by definition. That’s the State actively intervening in which kind of Irish writer to encourage.

“And take that agency Culture Ireland; the representatives of Irish culture it sent abroad never included a thinker. They were always writers of fiction, or maybe dancers, but never an Irish thinker. So there’s an official stance by the whole society, including the State, that thought is not an important component of Irish society.”

What’s on your mind at the moment?

“I’m wondering where we are going and I do not think the public doctrine that animates the western world today is going to last because I think it’s shallow, and strikes the subconscious of many people as [being] without meaning.”

Question: All in one rhythm™ is the official slogan of the 2014 Fifa World Cup™. Any better slogans?

Paulo Freire replies: “The multitude is always in the wrong.”