Is it not time we celebrate Ireland and Britain’s closely intertwined culture? 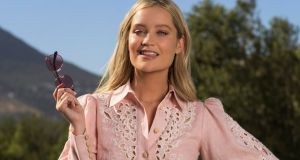 Presenter Laura Whitmore, who is from Wicklow and lives in London, received vile abuse on social media after posting about being as a guest on The Locker, a British Army-backed podcast, Photograph: ITV

Alexander Boris de Pfeffel Johnson is not generally regarded as an appropriate role model in these parts, but in one respect at least we seem happy to take our cue from him. In matters pertaining to cake, the British prime minister is famously pro-having it and pro-eating it. The same can be said for many of those who vehemently reject any association with the UK at the same time as they follow that country’s football teams, pop culture and media.

This is not true of Paul Mescal, whose “I’m Irish” tweet in response to being included by the Guardian and the Daily Mail in a list of “British” Emmy nominees had a quizzical brevity worthy of the performance for which he was nominated in the first place.

Of course, the Mail and Guardian articles were only the latest in a long line of ill-informed blunders of this sort, which have been well ventilated and vented over in these pages and elsewhere for many years. The almost wilful blindness in parts of the UK to the existence of Ireland as a sovereign independent state was further grimly exposed in the throes of the Brexit debate. And these silly errors can be reliably guaranteed to raise hackles on this side of the Irish Sea as we bridle at at the post-imperial arrogance of our larger neighbour. But consider for a moment another possible reason for British ignorance: the fact that, when it comes to culture, media and entertainment, our two countries remain so closely intertwined.

Because the flip side of Irish irritation at British obliviousness to the existence of this state is Irish unwillingness to acknowledge how deeply involved the UK is in many Irish creative successes, of which Normal People is only the most recent. Is it not about time for us to celebrate the vibrant history of British television commissioning that gave us Father Ted, Derry Girls and The Young Offenders? The world-class light entertainment industry that made the careers of Terry Wogan and Graham Norton possible? Or the London publishing houses and theatre companies who were instrumental in the careers of our writers?

No disrespect to Whitmore, but she’s not the most obvious candidate for a pile-on about the Troubles and British human rights abuses

If it’s mentioned at all, the fact that so many of these successes were made possible by British backing is often used as an exercise in self-flagellation. Unheralded and rejected in their own land, the story goes, writers, artists and performers were forced to take wing for foreign shores (or hop on a Ryanair flight to Stansted) in order for their talents to be recognised. That story is only partly true. Yes, Ireland has been an uncongenial and unhelpful place for some, but in many cases the UK simply offered greater opportunities and a better working environment.

The peculiarly overlapping cultures of the two islands run so deep as to be virtually invisible, but sometimes a conflict brings them into sharp relief. Which is when things start getting weird.

Take the case of Laura Whitmore. Originally from Bray, Co Wicklow, the TV presenter has worked on both sides of the Irish Sea but currently lives in London, where she specialises in reality shows and fronted the most recent series of Love Island for ITV. No disrespect to Whitmore, but she’s not the most obvious candidate for a pile-on about the Troubles and British human rights abuses.

But that’s what happened this week when she posted to her hundreds of thousands of social media followers about her appearance as a guest on The Locker, a British Army-backed podcast, where she would be discussing “women who work in a male-dominated world”. The outrage which this provoked appeared to be rendered more acute by the fact that her very next post paid tribute to the late John Hume.

We’ll never know what the great Derryman would have made of the tricky philosophical question: “is it okay for a Love Island presenter and social media influencer to be paid to appear in a British army-sponsored podcast?” But nobody should be in any doubt that the vile abuse and insults that followed against Whitmore were about as far from the principles he espoused as it’s possible to get.

If you support the right of footballer James McClean to refuse to wear a poppy (and you certainly should), then logic dictates you should equally support Laura Whitmore’s freedom to appear on whatever podcast she pleases. You may not approve of armies in general or the British one in particular, but the implication that because she’s from Wicklow she has committed some sort of betrayal of her nation mirrors the worst sorts of modern red-faced British nationalism and ignores the complexity and fluidity of how people move between our closely connected cultures.

Idles singer Joe Talbot: ‘Conor McGregor is an inspiration. There’s a severe vulnerability to him’
9