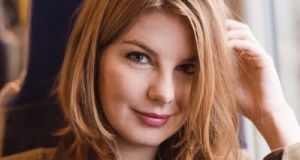 Caroline O’Donoghue: has a real gift for description

All friendships, female ones in particular, are so much less complicated when things are going wrong for one or other person. To be loyal to a struggling friend is relatively straightforward; to be genuinely happy about their successes and not to see them as reflections of your own failures and shortcomings is a good deal more tricky.

Struggling to make a breakthrough in the British film industry, 29-year-old Charlie Regan is deeply jealous of her beautiful best friend, Laura, who has lately been “lost in the undertow of heterosexual commitment and surprise weekends in Belgium”, leaving Charlie to mope around their old bedsit like a ghost. Their relationship is further complicated by Charlie’s attraction to Laura, who is straight but confusingly curious.

When Charlie receives the exciting and unexpected news that her short film It Takes a Village, inspired by a tragedy in her father’s childhood, is going to be shown at the Cork Film Festival, she holds off telling Laura about it for several days. “This is mostly because every meeting with Laura lately has been so peppered by her endless stream of Exciting News that I have learned to hold some of my news back to make it seem like there’s stuff going on in my life too.”

Caroline O’Donoghue’s delightfully quirky second novel is a propulsive and colourful adventure that moves at a galloping pace. After an inauspicious showing of Charlie’s film at the festival, the two English girls travel on to Clipim, a small fictional island off the coast of Kerry, as west of Ireland as you can possibly get and where Charlie’s father came from. Charlie wants to connect with her dad’s history before she loses him. Only ever half-listened to before, as parents’ repetitive stories to their children tend to be, his memories have taken on heightened significance and relevance to Charlie as he has become frailer and closer to death.

The arrival of Charlie and Laura – who are transported to Clipim by Joe the ferryman and his elderly terrier, Satan – upsets the island’s dynamic. The ensuing drama unfolds at The Fiddler pub, a place that “makes it feel as though there’s a storm happening just outside, and that you are lucky to be safe from it”, and is populated by characters like Mary, “a smiley, chatty woman who is probably 4 foot 11 without her perm but 5 foot 3 with it”. There’s also a black-haired singing American barmaid, Maria, who Charlie quickly becomes close to; and skulking caravan manager Benjamin Barry, who discovers Charlie’s somewhat dubious means of making a living as an amateur pornographer.

As they try to solve the decades-old mystery of the deaths of 18 schoolchildren in the schoolhouse, the book becomes a sort of Nancy Drew murder mystery, as acknowledged by the girls themselves. The implausibility of the plot doesn’t make it any less absorbing; it adds to the sense of hearsay and folklore.

Charlie begins to question both her complicated relationship with Laura – “I hear her gasp beside me. She pulls out her inhaler and takes two quick puffs. Laura’s inhaler is one of my secret favourite things about her: it’s so wonderfully, woefully nerdy, so out of place with the rest of her” – and her understanding of her father’s life.

When Charlie begins to uncover the truth about the devastating history of the island, the islanders’ initial Céad Míle Fáilte welcome and clover-foamed Guinness fades and is replaced by communal coldness and suspicion of these English outsiders who are spending far too much time digging about at the Old School House and trying to coax information from increasingly reluctant and laconic locals.

True to its title, there are indeed several scenes of a graphic nature in this book, but they are so astutely observed and honestly described that they never jar or cause the reader to cringe. O’Donoghue’s prose is witty and original and she has a real gift for description. This is a gorgeous exploration of the messy and fragile nature of friendship and all the many forms of love, as well as of the primal need we all have to belong.

The Books Quiz: Who observed that ‘Hell is – other people!’