The Lonsdale Project: A production of creativity and science 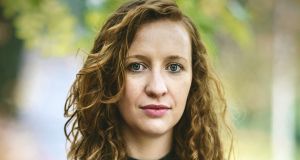 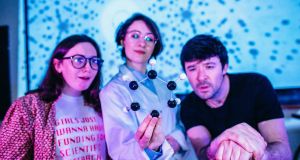 In 1970 the Irish crystallographer Kathleen Lonsdale published an essay called Women in Science, which reflected upon half a century of experience in the subatomic field.

The essay focused less on her achievements – her identification of the structure of benzenes, which chemists had been fighting about for years – than on the gendered nature of those experiences, and that of the women whom she championed throughout her career.

Her research was stark. More than 50 per cent of women in science, she found, chose to remain single, sacrificing domestic life for scientific discovery. Significant numbers who married, meanwhile, gave up their research as they took on their husband’s names. The reasons Lonsdale cited echo contemporary feminist debates about maternity leave and the domestic breakdown of labour.

However, as playwright and theatre maker Sian Ní Mhuirí explains, Lonsdale also illuminated the gendered conventions that still dominate in current times: “She talks about how the personality traits being instilled in boys and girls by society make [science] a difficult thing for a woman to pursue. She says the idea of being single minded, of dedicating yourself to some niche solitary work, of managing projects and people – all the traits that make an excellent scientist, an excellent researcher – she says we are trying to siphon off girls from a young age. And that is still certainly true.”

Ní Mhuirí defines herself as one of those girls steered away from developing a scientific mind. “I was actually really good at maths and science when I started secondary school,” she remembers, “but by the time I finished, I didn’t even have a science subject anymore. I don’t know if I wasn’t encouraged or I just felt it wasn’t for me, but all that knowledge fell away and I went into the arts, and on to study theatre.”

She wrote with such conviction that I found myself really moved

In fact, when Ní Mhuirí first came across Lonsdale it was by way of the scientist’s politics rather than her research. As well as her academic achievements, Lonsdale was a famous pacifist and political activist, spending five weeks in Holloway Prison during the second World War as a conscientious objector.

Ní Mhuirí read some of her writing about pacifism at the British Library in London “and she wrote with such conviction that I found myself really moved”. It was Lonsdale’s ability to communicate her beliefs so clearly that was “the first real hook for me”.

Ní Mhuirí started looking deeper into Lonsdale’s story. “I just became fascinated with the breadth of her passion across so many areas of life.” It is rare, she says, that you find a story “that has so many different access points in terms of what you could be interested in, so I just had to pursue it”.

With so many potential starting points, Ní Mhuirí struggled at first to pinpoint a central through-line for what would become her new play, The Lonsdale Project. She knew, however, who she wanted its audience to be.

With her company Super Paua, she had previously toured an LGBT play for young audiences, Aunty Ben. For The Lonsdale Project, she had teenagers in mind. “Teenagers are notoriously difficult to get to theatre,” she says, “They are a demographic that a lot of people can overlook as intelligent audience members, but they have a need – and a right – to artistic experiences: it’s important to their citizenship and their development. But the thing about creating work for young people is that it needs to be facilitated by the gatekeepers in their lives: their teachers and parents.”

Given the target audience, then, Super Paua is partnering with a variety of venues outside of traditional theatrical spaces – including the Royal Institution, SciFest and TU Dublin – to maximise opportunities for engagement. Indeed, it was at a work in progress showing at SciFest last year, at TU Dublin’s Tallaght complex, that The Lonsdale Project took on a concrete direction.

Dr Claire Murray, a crystallographer who was particularly interested in Lonsdale, happened to be in the audience. Afterwards, she urged Ní Mhuirí “not to sacrifice the science to the life”, and Ní Mhuirí realised that in order to do justice to Lonsdale’s story she would have to dig deep into her discoveries.

“What Claire said was right,” Ní Mhuirí explains. “If Lonsdale’s story is not as well known as it should be, it is precisely because, as a woman, the focus is usually less on the nature or the substance of her achievements than the fact of the achievements.”

This reflected a wider issue in new feminist histories for young people too. “People are writing huge amounts about pioneering women now, and that is brilliant,” Ní Mhuirí says, “but the focus is often historical or social; it is more about how a woman managed childcare, or her relationships – the obstacles she overcame – rather than the thing that she dedicated her life to.”

After speaking to Murray, “I realised that if we didn’t give people an opportunity to see or understand Lonsdale’s ideas, we would be doing her a disservice from an intellectual perspective. And what about all those young women who are scientifically inclined? If we didn’t get deep into the science, we would be dismissing their right to see those ideas explored and to explore those ideas themselves. So, basically, I needed to get to grips with subatomic theory, which was an especially daunting idea for me as a lay-person, who had decided that science was beyond my reach.”

Ní Mhuirí went on to engage Murray as adviser to the project and took a crash-course in chemistry. Murray, meanwhile, was delighted to have the opportunity to be involved in an arts-centred project. Having previously advised on the chemistry of painting restoration and collaborated with artists on a professional photography project focused on visual interpretations of crystallography, The Lonsdale Project allowed her to apply her scientific mind outside of the field of chemistry.

As she explains, “This sort of collaboration is something that Lonsdale herself was very passionate about. At the Festival of Britain [in 1951] she worked with textile artists to make materials out of benzene structures. She really understood the overlap [between science and art] and thought that it was important that the worlds would meet. There is a tendency for people to think that if they can’t draw, say, that they aren’t creative, but science and art are not in opposition. Both [disciplines] have a lot in common.”

As Ní Mhuirí observes, by way of conclusion: “The duality just isn’t borne out. Art is technological and intricate; think of the technology involved in putting something on stage or the process of creating a piece of ceramics. And science involves so much creativity: involves loads of skills that you would see in any youth theatre.

“There is a lot of joy to be found looking at one through the lens of the other, and if you think of some of the biggest challenges facing us today – climate change, for example – science might help us understand it but science alone won’t solve it. We will need to engage in a breadth of creative thought to come up with any solution.” It is a sentiment that Lonsdale would surely applaud.