Thwarting the sex police: Art and perversion in McGahern and beyond

In the late novelist’s work, vivid characters chafe against authority and public morals 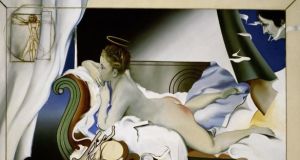 Michael Farrell’s Madonna Irlanda (1975), pop-art paintings depicting Ireland as a baby-faced courtesan with what looks like a freshly spanked behind

On Twitter, earlier this year, I saw an advert for menswear taken from a 1914 edition of the Irish Volunteers’ newspaper. It was posted by Prof Richard Kirkland, who found it when researching, and it reads: Don’t Hesitate to Shoot straight to GLEESON & CO for your Tailoring and Outfitting.

It features a sketch of a dapper gent in a Crombie trench. In a magazine for republican military volunteers. It says, in case you missed that, Don’t Hesitate to Shoot straight to GLEESON & CO. I laughed, but also wished I’d encountered this piece of ephemera earlier, when working on my book about the writer John McGahern.

Specifically, I thought of a scene in Memoir (2002), reconstituted from anecdotes the writer was told about his father, Francis McGahern. One day during the War of Independence, and in the midst of neighbours saving hay, the young Francis – then part of a flying column and living on the run – appeared unexpectedly to help, before disappearing once again into the landscape.

The sheer romance of this story is added to by the fact that Francis was dressed, inappropriately, in a fashionable suit: he didn’t take anything off, not even when the day grew hot. Francis comes and goes, in the eyes of the neighbourhood, as a handsome young hero in fancy clothes. He exudes daring and sex and separateness.

But after the war, nothing is the same. Francis becomes a widowed provincial police sergeant who takes out his rages, his traumas, on his children – especially the eldest, John.

McGahern fils is fascinated by Francis, leaving him “with God” at his death because he cannot, despite decades of trying, understand him. The sadness and strangeness and danger of Francis fascinates us too.

Because Francis was not self-reflective during his lifetime, his son sometimes relies on anecdotal sources and opinions in Memoir, including another which describes Francis’s personality as that of “an actor”. The performance put on for the hay-saving neighbours is certainly theatrical, but the suggestion of something unstable here, of a mask or a false identity, has a dandyish and mystical quality too.

The masculinity Francis exudes is constituted almost entirely by props, by uniforms and batons and guns, and he is never revealed as anything more vulnerable

Writers such as Wilde and Yeats believed in wearing masks to allow a complicated selfhood deal with the needs of public life; in Francis’s case, however, rages and grudges were proof of a person who did not understand himself.

His embrace of roles, then – the soldier, the sergeant, the patriarch – seem like attempts to find an identity. There is nothing at the centre of this but everything on the surface: brass buttons shining on uniforms, a penknife or a policeman’s baton, a gun, a key, an expensive suit.

What remains in between and indefinable are eventual and inevitable outbursts of violence like the one that famously opens The Dark. In this scene, a father punishes a son for saying (or perhaps just thinking) the word “F-U-C-K” by forcing him to strip and bend over an armchair, to be whipped on the buttocks with a belt, in a scene of savagery that also suggests sexual assault.

The suggestion is, I believe, deliberate, even if it isn’t made explicit. The pose and the scenario, the bent-over boy, the bare behind, the belt and the threat of “I’ll cut the arse off you”, imply it; we, the readers, fill in the gaps. We are implicated. We know and we don’t know.

The masculinity Francis exudes is constituted almost entirely by props, by uniforms and batons and guns, and he is never revealed as anything more vulnerable.

Towards the end of McGahern’s final novel, That They May Face the Rising Sun (2002) – a gentle work in which the quiet passage of seasons is marked with beauty and respect – two men, preparing a third for burial, strip and clean him with exquisitely understated tenderness. They remark on the “sacredness” of every single human life.

That Francis never achieves this kind of redemption is both a result of his personal behaviour in life and a note of poignancy struck, for me, within the wider context of McGahern’s fictional and actual world.

Cheryl Herr points to a culture of intense sexual policing in which the result of repression is less an explosion of hyper-masculinity than, in essence, a terror of women

I called a chapter in my book about McGahern Fascinating Francis because I wanted, however, to strike a more mischievous note – recalling Susan Sontag’s Fascinating Fascism (1973), a piece in the New York Review of Books that acknowledges the enduring and sexual allure that authoritarian ideology, especially when represented by beautiful bodies, holds for the western imagination.

In a brilliant essay, The Erotics of Irishness, Cheryl Herr points to a culture of intense sexual policing, in which the result of repression is less an explosion of hyper-masculinity than, in essence, a terror of women.

To illustrate this, Herr uses Michael Farrell’s Madonna Irlanda (1975), a series of pop-art paintings depicting Ireland as a baby-faced courtesan with what looks like a freshly spanked behind. The painter, or subject – the Irish male – looks on from offstage or, in another iteration, from the confines of a tube, like a homunculus. He cannot move or engage, although the woman (lover, mother, “Irlanda”) is indifferent anyway.

I kept this image in mind when thinking askew about Francis, about violence and desire, about national identity and post-independence Catholicism and the thwarted attempts by bodies in McGahern’s writing to escape straitjackets of public performance, “masks”, rules and literal prisons – cells, barracks, firing squads – as well as regimented nuclear families and marriages.

Being a woman in contemporary Ireland means contending, intimately, with the aftermath of this culture more often than you might think.

McGahern was a significant influence on me when I was writing my first novel – a book about sex, freedom and bad decisions from the perspective of a contemporary Irish woman – and not only because I’d spent four years on a PhD dissertation about him. In his work I see less a chronicle of “de Valera’s Ireland” than a cast of vivid and sensual characters chafing against authority, public morals, and class hierarchy. Sometimes it is heroic and sometimes it is perverted, but it is always human.

In This Happy, my protagonist, Alannah, falls vertiginously in love for the first time. The second time, she falls more warily in love – she becomes conniving, working to meld love and pragmatism and build a life for herself. I don’t approve of a single decision she makes but nor do I condemn her, and I turned her story into a baroque study of what would happen if a spuriously liberated Irish woman followed through on her most potent feelings and her animal instincts.

It’s a universal story, but the context of Ireland is never far behind or irrelevant; she meets resistance but she fires onwards anyway in ways that wouldn’t be possible for a girl in the real world without serious consequences – emotionally, financially and socially.

Early responses to the novel’s treatment of sex are bearing this ambivalence out. It doesn’t bother me at all, however, if some readers feel uncomfortable. I am with Garth Greenwell on this: I wanted something between pornography, art and – as an extra – eccentricity.

For the cover of This Happy, we were fortunate enough to be permitted to use a detail from Patrick Swift’s Claire McAllister on a Red Couch (1957). This is, in a way, a roundabout McGahern tribute: Swift and McGahern were friends, hobnobbing in 1960s Soho with the Irish/British set, and the quality of clarity and mystery combined in Swift’s paintings are thrilling to me.

I haven’t found much information about the sitter, a young and not especially happy-looking woman dressed conservatively. I suspect the painting was made in Dublin but cannot be completely sure. In a way she is another defiant but basically unknowable personality: we have her individual lineaments, but little more. Her privacy is intact.

Niamh Campbell’s monograph Sacred Weather: Atmospheric Essentialism in the Work of John McGahern is out now with Cork University Press. Her debut novel, This Happy, is published by Weidenfeld & Nicolson. Twitter @campbellniamh