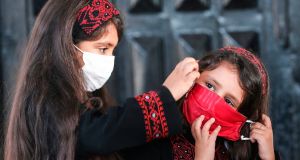 Pandemic: the first cases of coronavirus in Gaza were reported in March. Photograph: Mahmud Hams/AFP via Getty

Irish artists have joined international colleagues as signatories to an open letter published yesterday that urges an end to Israel’s siege of Gaza amid the coronavirus pandemic. Among more than 200 international musicians, actors, film-makers, authors and others, the Irish signatories include Colm Tóibín, Liam Cunningham, Anne Enright, Mary Black, Christy Moore, Stephen Rea, Lankum, Kevin Barry, Emer Martin, Sinéad Cusack and Dónal Lunny. They have backed Amnesty International’s call for a military embargo on Israel “until it fully complies with its obligations under international law”.

Their letter says “what happens in Gaza is a test for the conscience of humanity”, and “Gaza’s almost two million inhabitants, predominantly refugees, face a mortal threat in the world’s largest open-air prison”. Writing that “international pressure is urgently needed to make life in Gaza liveable and dignified”, the signatories say “Israel’s siege must be ended. And most urgently, a potentially devastating outbreak must be prevented.”

The first cases of coronavirus in Gaza were reported in March. Palestinian, Israeli and international humanitarian and human-rights organisations have called for the lifting of Israel’s siege so Gaza can address its severe shortages of medical equipment.

The petition was published a day ahead of the anniversary of Israel’s declaration of independence, on May 14th, 1948, and two days ahead of Nakba Day, or Day of the Catastrophe, as Palestinians refer to their annual day of commemoration of their subsequent displacement.

The artists write that “well before the ongoing crisis, Gaza’s hospitals were already stretched to breaking point through lack of essential resources denied by Israel’s siege. Its healthcare system could not cope with the thousands of gunshot wounds, leading to many amputations. Reports of the first cases of coronavirus in densely-populated Gaza are therefore deeply disturbing.”