Over 200 Kate Bush fans gathered in Fairview, Dublin for a performance of the 'Wuthering Heights' dance routine. The song was a no.1 hit in 1978. Other 'Most Wuthering Heights Day Ever' events have taken place around the world. Video: Bryan O'Brien 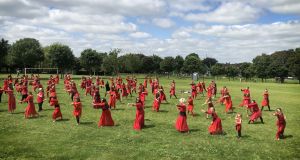 Some of the crowd of 200 gathered in Fairview Park on Saturday. Photograph: Bryan O’Brien

Over 200 Kate Bush lookalike fans gathered in Fairview Park, Dublin on Saturday for a group performance of the Wuthering Heights dance made famous in the video that accompanied the 1978 hit.

Wearing red dresses similar to that worn by Bush in the video, the group practiced, performed and finally picnicked.

“Everybody loves Kate Bush and the wildness of the way she performs. You get rid of all your awkwardness when you’re doing it” said Aoife Harbison from Dublin.

“I’m not a performer or a dancer, but I can go out here with my mates and have a laugh.Its liberating and its great” said Joan Mallon from Dún Laoghaire who was attending the event for the third year in a row with group of friends.

It’s the third year that “The Most Wuthering Heights Day Ever” community event has been held in Ireland and funds raised were donated to Women’s Aid. Similar events took place in other cities around the world.

Brie Larson is sick of being interviewed by ‘white dudes’
6

Jeremy Renner ‘threatened to kill himself and his ex-wife’
8