From quiet beginnings, the ‘Take Me to Church’ singer’s music, and its political nous, are growing in depth and stature 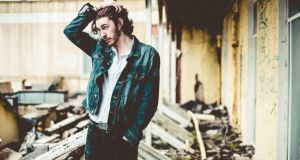 It might feel as though Hozier came out of nowhere, but the Wicklow musician has been simmering for a while. Let’s take his progress in reverse: the music video for his song Take Me To Church has, since being uploaded in September, accumulated 240,000 views. It’s the lead track on an intriguing EP that was released in July. Before that, he showed his vocal range with the slightly avant-garde Dublin group Nova Collective. He bailed from a degree in music in Trinity College to concentrate on writing and recording, but made his mark there as lead vocalist with the Trinity Orchestra.

Andrew Hozier Byrne is sincere and reflective. He hasn’t yet garnered the PR expertise of summing up his work snappily, which is a good thing, although his honest explanations can end up being hard to follow. He started playing music when he was 14 or 15, although he had been singing for years. He picked up a guitar and kept at it, concentrating on folk and blues. Now, his quiet demeanour is at odds with an incredibly commanding musical approach that has grown in depth and stature. Take Me to Church best captures this development. It’s musically and vocally powerful, with perfectly crafted lyrics: “My lover’s got humour / She’s the giggle at a funeral.”

Hozier wasn’t particularly satisfied with previous efforts. “Some of the earlier stuff I did in studio with producers was very pop-directed, which I was uncomfortable with.” When he was spotted at school singing a cover, meetings with labels followed. Demos were lined up, but nothing solid materialised. Rubyworks, his current label, had been in the background, articulating its support. “Just around the end of last year, I realised I had never been happy with stuff fully produced by other people and probably was never going to be,” he says. “Part of it is ego, lack of being able to let go. So I said I’d do it myself.”

To do this he retreated home, recording demos, figuring out the structures and the potential sounds. “Being in a studio is quite a creative and energetic process. ‘Let’s try this, let’s try that’ . . . You come away from it two weeks later and you look at it and go, ‘That’s not me. That’s not what I wanted. How did I get to that point?’ ”

This EP was different. Recording himself, he started to figure out who could enhance the tracks in a studio. “I used to almost not look forward to recording, because it was like, ‘Okay, what am I going to have to sacrifice?’ It’s a negotiation all the time. So it’s different now, I guess. Rob [Kirwan, his producer] was so cool about it. He just made it as good as it could be.”

Originally, Hozier and Rubyworks were eying up Charlie Andrew and Mark Bishop, the duo behind Alt-J’s debut album, An Awesome Wave, as producers. But after that record won the Mercury Music Prize the pair were inundated, and Hozier found himself working with Kirwan.

Kirwan’s approach is probably closer to Hozier’s music: he is an engineer and producer who worked on PJ Harvey’s Let England Shake and produced Delorentos’ stunning third album, Little Sparks. Hozier’s voice has found its place, filling out the entire surface of tracks like a glass of water knocked over on a table, and nestling into the corners of his expansive tracks.

At the time these new songs were coming together Hozier was rereading A Portrait of the Artist as a Young Man. He’s thoughtful and softly spoken about the other influences that coloured the songs. “There is a reccurring theme in a lot of the songs of a liberation of the self . . . There was also the end of the first relationship I had ever had . . . Where do you end up after that? As an individual: the individual that you were beforehand, the individual you were when you were in love, and how profoundly different those things are. Then what do you do afterwards?

“I found the experience of falling in love or being in love was a death, a death of everything. You kind of watch yourself die in a wonderful way, and you experience for the briefest moment – if you see yourself for a moment through their eyes – everything you believed about yourself gone. In a death-and-rebirth sense.”

This sense of drama is evident in the video for Take Me to Church, directed by Brendan Canty of Feel Good Lost. It’s a powerful film that references the repression of gay people in Russia through a personal story of two gay lovers subjected to violence. A brace of gigs at the Pepper Canister Church in Dublin in December have sold out, and gigs in Cork and Galway are scheduled for late December. He’s prepping the next batch of songs to record in November.

“The pressure is what to release next. I know that the next group of songs we’re going to come to studio with will probably be a lot brighter. Every song I write won’t be as heavy as Take Me to Church, every video isn’t going to be as hard-hitting . . . but you just have to kind of go ahead with it.”