Mark O’Connor’s Cardboard Gangsters is so enjoyable, you forgive its flaws

Starring John Connors (King of the Travellers, Love/Hate), Carboard Gangsters follows a group of wannabe gangsters as they attempt to gain control of the drug trade in Darndale. 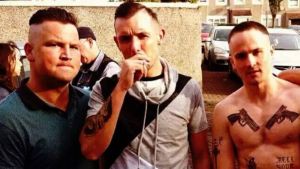 Six years ago, Mark O’Connor, an inventive young Dubliner, impressed festival crowds with his rough-hewn debut Between the Canals. Few young film-makers moved the camera with such confidence or were so economical in the creation of character. The picture was a bit of a mess, but our antennae remained on alert. Since then he has developed into one of our most interesting oddballs (that is meant entirely as a compliment). King of the Travellers over-reached itself. Stalker was everything you would want from an experimental psycho-comedy.

Cardboard Gangsters is O’Connor’s most complete film yet. The picture, set among small-time criminals in Darndale, has admirable kinetic sweep and a keen sense of the absurdities of city life. The picture does lack story and structure. But it is so enjoyable on a scene-by-scene basis that it proves hard to care.

The charismatic, unshakeable John Connors – who also takes a screenplay credit – plays troubled young operator Jay. He has his share of problems. Hoodlum landlords are threatening to throw his ma out of her house. His girlfriend may be pregnant. The social welfare people are threatening to stop his dole because he does the odd gig as a DJ. Soon he and his pals are contemplating an assault on the upper rungs of the ladder. They rob an off-licence. They move from flogging weed to shifting heroin. We’ve seen enough crime movies to suspect their path will not be unimpeded.

The star of the show is Michael Lavelle’s camera. O’Connor has talked him into long shots that follow the characters all the way down the street and into busy houses. He sets the scene at a party by taking us all around the action in one enormously busy take. Jay’s DJ set buzzes with delicious, oily energy. The punch-ups and pursuits are choreographed with an invention that stops just short of inappropriate relish. The film is exciting, but it is unlikely to inspire much copycat behaviour.

The film-makers are always on the lookout for a colourful aside or a humorous confrontation. Watch as one fellow fumes when he discovers that – after describing a “masterpiece” sandwich over the phone – the restaurant won’t deliver to Darndale. Nothing seems quite so foreign as the cheeky Northern Irish kids who muscle in on business. They may as well be from Hispaniola.

Occasionally, the film’s stylistic flourishes call up a bum note. If intercutting a sex scene with the frothy opening of a champagne bottle was deliberate then it demonstrates vulgarity. If the juxtaposition was accidental then it shows carelessness. It’s a shame the story doesn’t have a little more shape and originality.

For all that, O’Connor has – helped in no small measure by a towering turn from Connors – come as close to a Dublin Boyz n the Hood as we could have hoped. It’s noisy, loud, violent and sad. Cult popularity beckons.