The Hook and the Needle

A new poem by Sinéad Morrissey 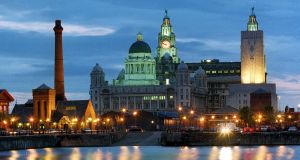 On the other side of the needle, my mother’s

freezing her knitted socks off

practising smoke rings at the back of the Craft Hut

Her friend is huge with news. This new band – my brother

shares their flat in Liverpool –

fire number one – they’re set to be massive –

her throat shut, blows an ‘O’ as neat as a bracelet,

flicks ash from her cigarette

and listens. Her purple regulation beret’s

stuffed in her blazer pocket and for years

it’s been too tight:

on toast for tea, her father

again, the wireless a sodden blanket

Slide out the vinyl, lower

the stylus and she’s through – leaving a note that she

hoped would say more – in the blink of an eye:

on the Liverpool ferry –

skirted, ready to blow a hole as wide

in my staggered father’s heart. Her mother falling

asleep of an afternoon

with her apron on in a suntrap at the end

of the garden sinks out of sight, and not

or bombs or the postman shot dead in Kilwilkie

by stamps of the Queen can summon her up again.

My mother’s Irish children dangle off

and imagine each half of their bodies awash

apart to sew from scratch once more among

in me, who, over halfway

through perhaps (one never knows), am hitching high my

skirts and running, aiming for the needle,

everything I own, shutting my eyes, as she once

did, to land where she began,

in a confetti of sweet pea and snapdragon,

the tea still warm in its cosy, the back

door on the latch.