How Gucci Mane became the fresh prince of Kildare

The Atlanta rapper brought his swing to The K Club, and liked it so much he made his new video there 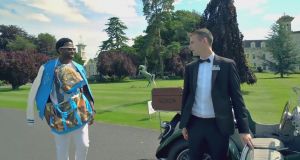 Gucci Mane in the video for Members Only

Not only does your Instagram feed reveal just how much your friends really earn, it’s often a window into your soul. Little did we know back in July that international rap artist Gucci Mane would bear his soul and reveal a true grá for Co Kildare, only for it to be the main feature in his new video for Members Only.

We nominate Gucci Mane as our very first new Very Best Friend simply because he seems like a joyous creature.

While on tour across Europe this summer, the Atlanta man took us on a journey – no, scratch that – he took us on a magic carpet ride on his first overseas tour. As he visited different countries, he updated his Instagram account (@laflare1017) with photos of him posing proudly outside each music venue, like a kid on his first day of school. He posted candid shots as he walked around the streets of Denmark, Belgium, France and Germany, with his Louis Vuitton bag in hand and his diamond goat (greatest of all time) chain catching the sun, using captions such as “‘Never mind me I’m just a rich American tourist #InternationalWop”.

When he came to play the Longitude festival in July, he posted an image of himself sitting in the hallway of a lush hotel in Ireland. Soon, word spread that it was Kildare. A mini war broke out, with people from different parts of Kildare claiming that he was staying in their lush hotel. Screen grabs were sent to friends. “Is this The K Club?” they wondered. “I don’t know, I’ve never been let in,” was the general reply.

He was so enamoured of the five-star hotel and golf club that he decided to film an entire music video in its hallways, fairways and golf buggies, with staff members cruising him around in a vintage Jaguar. He jogs topless across the well-manicured lawns and it’s the steamiest thing to happen in Straffan since, well, the Steam Museum for steam engines, which opened there in 1988.

Members Only is the latest single from his new album, Mr Davis. Most artists’ Instagram accounts make their lifestyles seem unattainable, by taking a prohibited selfie with a bunch of other good-looking millionaires in the bathroom at the Met Ball. But with Gucci it’s a pure joy. You can feel his excitement every time he visits somewhere new or meets another artist he loves. If he’s jaded, he’s doing a very good job at hiding it.

Gucci, take us on your next tour. We’ll take the photos, free of charge.

We reached out to The K Club for their take on the video. Alas, we got no reply.

LOSER OF THE WEEK

Who knew that the headline “Will Smith returns with new EDM single Get Lit” could evoke such fear? The 49-year-old is attempting to get down with the kids, but Get Lit is as bad it sounds. This is the sound of a midlife crisis, and I’m afraid to tell you, Will, but we will not be gettin’ jiggy with it.