When Irish tastes turned from stout to champagne

Archive: A 1989 shortage of French bubbly was attributed to demand from Ireland 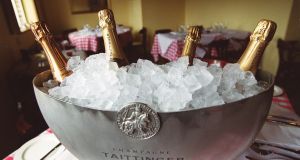 French producers were unable to keep up with the booming export demand for champagne. Photograph: Frank Miller

There’s not much to celebrate at the moment, but in the future it will be interesting to assess how Irish people’s drinking habits changed during lockdown. In 1989, Katherine Hone reported in The Irish Times on an emerging trend in Ireland, as champagne became more popular.

French producers were unable to keep up with the booming export demand for champagne, which was also exacerbated by moderate-sized harvests for a few years running. The UK remained France’s largest champagne customer, with imports increasing from 16 million bottles in 1986 to 20.5 million bottles in 1988. In 1986 and 1987, about 250,000 bottles of champagne were imported to Ireland from France but, by 1988, that had risen to 333,000 bottles. In the first half of 1989, champagne sales were up 12 per cent in Ireland, with some off-licences, such as O’Brien’s, reporting a 25 per cent increase.

Between 2017 and 2018, sales of sparkling wine, including prosecco and champagne, almost doubled in Ireland

The then secretary-general of the Comité Interprofessionel du Vin de Champagne, Jean-Luc Barbier, told The Irish Times that the increase in demand for champagne was down to economic growth and some changes in VAT.

The highest-profile champagne drinker in the State at the time was, no doubt, Charles “Champagne Charlie” Haughey, a real #influencer in his day when it came to showiness. According to a piece by Harry McGee in 2018, when the then French president, François Mitterrand, visited Ireland in 1988, Haughey demanded that he visit his Dublin mansion, Abbeville, to drink champagne. Haughey also gifted Mitterrand with a Louis le Brocquy painting of Samuel Beckett.

Between 2017 and 2018, sales of sparkling wine, including prosecco and champagne, almost doubled in Ireland. Sparkling wine accounted for 2.7 per cent of all wine sales in 2017, but leaped to 4.7 per cent the following year. But this figure is relative, as by 2018 imports of champagne to Ireland had halved compared to the Celtic Tiger era. The rise in “sparkling wine” sales showed a gravitation towards prosecco and cava, rather than a thirst for champers.