‘We must now work for equal citizenship for women and girls around the world,’ says Minister

An event has been held at the UN headquarters in New York where a poem by Eavan Boland entitled ‘Our Future Will Become the Past of Other Women’ was launched to celebrate 100 years of Irish Women’s Suffrage/ Vótail 100. Video: UNTV 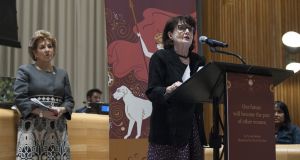 Eavan Boland reading a poem commissioned by the Royal Irish Academy and Ireland’s permanent mission to the United Nations to mark the centenary.

Women still do not enjoy full suffrage around the world despite huge advances in female voting rights over the last century, Minister for Children Katherine Zappone has said.

Speaking at an event in the United Nations to mark one hundred years since Irish women won the right to vote, Ms Zappone said that gender parity had not been achieved in many countries.

“The pasts of those who fought for our right to vote become our presents — we must now work to shape a better future of greater representation, greater participation, and fuller and more equal citizenship for women and girls around the world,” she said at an event attended by representatives from across the United Nations including the head of the general assembly.

Highlighting the centenary of the extension of the franchise to certain women over 30 and the election of the first Irish female member of parliament, Ms Zappone said that, until that winter of 1918, Irish women had lived “outside history” – a reference to one of Eavan Boland’s best-known poems.

Ms Boland, a professor at Stanford University and one of Ireland’s leading poets, read a new poem that has been commissioned by the Royal Irish Academy (RIA) and Ireland’s permanent mission to the United Nations to mark the centenary.

Titled “Our future will become the past of other women,” the poem reflects on the legacy of the Irish women who first won the vote:

Gathering one by one in Irish cities

History: called to their duties

As citizens to exercise

This hard-won right: this franchise.

The poem also pays tribute, as in many of Boland’s poems, to the mothers and grandmothers who went before them:

As we mark these hundred years

We will not leave you behind.

Speaking to The Irish Times, Ms Boland said she was honoured when first approached by Pauric Dempsey of the RIA about the commission.

“A public poem is always a strange commission for a poet, it’s based on the old idea of writing about a subject that many people have a stakeholding in — but I couldn’t wait to do it...

“I’m a huge admirer of the suffragettes in Ireland. They lived at a time when the state was being established with a very important rhetoric of freedom but their ideas of freedom were not always recognised. Even leaders like John Redmond spoke very disparagingly about the suffragettes. It was in the air.”

While Ms Boland has long explored the intersection between ideas of nationhood and female identity in her poetry, she also has a personal connection with Ireland’s mission to the United Nations. Her father was Ireland’s first ambassador to the United Nations and the first and only Irish president of the general assembly. “He had a great belief in the voice of a small nation in this great enterprise of nations… That idea stayed with me.”

At Wednesday event, several UN ambassadors read sections of the poem in their native languages.

“This is a very proud and a very precious moment,” Irish ambassador to the UN Geraldine Byrne-Nason said of the 1918 anniversary, as she opened the event. “Some would say the women of Ireland have never looked back, but today they should. Eavan has found the universal voice for women.”

Maria Fernanda Espinosa Garcés, the president of the general assembly, said she was herself a poet who had been inspired by the work of Eavan Boland.

“Ms Boland your words have inspired generations,” she said, as she highlighted the challenges still facing many women across the world.

The general election of December 1918 was the first in which women could vote and run for office in Ireland and Britain.

On Monday December 10th, The Irish Times marks 100 years since the election, with a magazine and unique commemorative poster illustrated by artist Paula McGloin. Articles by Catriona Crowe, Ivana Bacik and others will explore how women have fared in the century since.

The “Vote 100” commemorative history project is in conjunction with the Royal Irish Academy and the Government of Ireland.