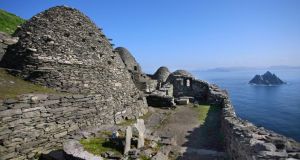 For 600 years Skellig Michael was a centre of monastic life for Irish Christian monks. The Celtic monastery, which is situated almost at the summit of the 230-metre-high rock, became a Unesco World Heritage Site in 1996. File photograph: Valerie O’Sullivan

Archaeologist and author John Sheehan said the Government was turning a place of “international significance” into a “commodity”, and “those charged with protecting and preserving it are being silenced”.

The NPWS, OPW and Department of Arts, Heritage and Gaeltacht are referring press queries on filming on Skellig Michael to the Irish Film Board, which has not responded to queries from The Irish Times.

Earlier this week, An Taisce confirmed it had written to Minister for Arts Heather Humphreys asking for an explanation as to how consent was given for filming to take place on Skellig Michael this autumn, given that there will still be protected seabirds on the rock.

An Taisce is also concerned about the impact on the fragile archaeology of filming that could, according to Radio Kerry, last up to six weeks, from mid-September. The radio station said it could involve footage for Star Wars VIII.

Filming approved during the nesting season last year was for the forthcoming film, Star Wars VII – The Force Awakens.

Kerry-based poet Paddy Bushe, a member of Aosdána, has said that if reports of more extensive filming were correct, the Government and the Minister for Arts, Heritage and Gaeltacht had been “complicit” in silencing public bodies at the behest of a multi-billion international commercial company.

“ In principle, I would be happy to leave such a judgment to the bodies to whom the guardianship of Skellig Michael has been entrusted on behalf of the Irish people, and on whose guardianship the future of the island as a world heritage site depends.”

Unesco has not been able to confirm that it has been formally told of the plans, but has pointed out that it is a matter for State authorities.

West Cork-based cinematographer Chris O’Dell has written to Unesco’s world heritage committee and to Ms Humphreys, calling on both to suspend further permission for Disney Lucasfilm to film on Skellig Michael.

The Department of Arts, Heritage and the Gaeltacht said in response that the NMS and NPWS were “fully involved in the approvals process in regard to the limited amount of filming that took place on Skellig Michael last year”.

The Irish Film Board has not responded to the criticisms.