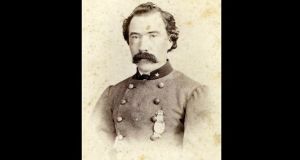 Councillors in the Tuam area of Co Galway have opted not to remove a memorials to Confederate soldier Richard ’Dick’ Dowling. Image: Wikipedia.

Councillors in the Tuam area of Co Galway have opted not to remove one of the few memorials to a Confederate soldier in Ireland.

Cllr Shaun Cunniffe (Independent) had proposed that the plaque to Maj Richard ‘Dick’ Dowling be removed from Tuam Town Hall where it was erected in 1998.

He said after the violence in Charlottesville, which followed the proposed removal of the statue of Confederate general Robert E Lee, he was contacted by some people in the US asking him to have the Dowling plaque removed.

Dowling was born outside Tuam in 1837 and his family fled Ireland in 1845 after being evicted. The plaque praises him as a “business and civic leader” and the man who formed the first oil company in Texas.

It also mentions that Dowling and his men foiled an invasion of Texas by 5,000 Union troops at Sabine Pass on September 8th, 1863, during the American civil war.

The “battle of the Sabine Pass” was compared by Confederate president Jefferson Davis to the Persian-Greek confrontation at Thermopylae.

The proposal did not go to a vote among the eight members present at the Tuam Municipal District Council on Monday afternoon.

Cllr Donagh Killilea (Fianna Fáil) said there was no support for Mr Cunniffe’s proposal from the other members of the council. He suggested that objections to the plaque came from the US and not from the local area.

“He was more or less a lone voice,” he said. “We all felt that it was not a top priority for the town. There are more important things going on.”

Mr Killilea said Dowling only spent three years in the Confederate army and may have joined up simply to survive in the US. He suggested there were other aspects of his life which were more noteworthy. He was a state senator and a successful businessman though he died aged 30 in 1867.

“It may cause offence to a small number of people who don’t live in the town. Our view is that it should be left where it is to celebrate a guy who got on well in business in the United States. He managed to survive like most people did 180 years ago by joining an army,” he said. “He is not being celebrated in Tuam because he was a major in the Confederate army.”

Mr Killilea suggested, however, that if a civic museum was opened in Tuam, they would look to move the plaque there at a later stage.

Dowling remains a controversial character in Houston, Texas, where he settled. A man was arrested last month after trying to blow up a statue of Dowling in Houston’s Hermann Park.

Dowling Street in Houston was renamed Emancipation Avenue earlier this year though Tuam Street, just off it, retains the same name. The name of Dowling Middle School in the city was changed to the Audrey H Lawson Middle School last year as part of a renaming campaign by the city authorities.