Course involved a series of three-hour lectures on Wednesday mornings 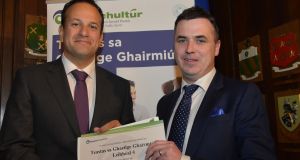 An Taoiseach Leo De Varad has joined what is presumably a very short list of international heads of legislature awarded a certificate to prove fluency in the first language of their own country.

The honour of a Level 4 (lower intermediate) Certificate in Professional Irish was bestowed upon An tUasal De Varad during a ceremony in the Mansion House on Thursday.

The Taoiseach’s Indian lineage was a prominent media theme during the recent Fine Gael leadership contest, although the provenance of the moniker De Varad is open to question. The Taoiseach said Varadkar means “from Varad”, the place where in India where his father Ashok is from, so he decided to translate it into Irish as De Varad.

The Irish language course is run by Gaelchultúr, whose director of education Éamonn Ó Dónaill confirmed the leader of the Dáil had “worked extremely hard” during the course.

“He attended every single class and did all the continuous assessment tasks given to the students. He really applied himself and took the course very seriously,” he said.

The course involved three-hour classes every Wednesday morning between February and the beginning of May, followed by an oral exam at the end of May.

The Taoiseach was one of 70 people presented with certificates on Thursday. Speaking as Gaeilge, he said he takes “great pride” in the achievement.

“I studied the language at school, of course, but like a lot of people in this country I haven’t had many opportunities to use it since then and was therefore out of practice.”

He follows in the footsteps of Government Chief Whip Joe McHugh who improved his poor fluency in Irish after being appointed Minister of State for Gaeltacht Affairs in 2014.