Opinion: Plan for the year may be a bigger secret than plan for the Rising 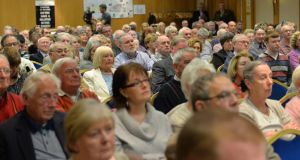 ‘In Dublin last weekend, 250 relatives of 1916 combatants gathered to complain that they have received no information on what is being planned.’ Photograph: Alan Betson / The Irish Times 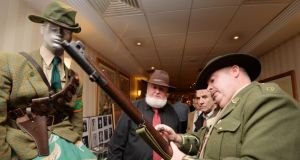 The word “amnesia” has frequently been used this year in relation to the historic southern Irish relationship with the first World War and its legacy. The centenary of the outbreak of that war has, it seems, offered an opportunity to make amends for such neglect and do justice to the motivations and sacrifices of the 200,000 Irishmen who enlisted in the British army during that war. The announcement this week that Ireland’s ambassador to Britain, Dan Mulhall, will lay a wreath at the war cenotaph in London in November to coincide with Armistice Day was widely reported as an unprecedented development and another extension of a new mutual remembrance, respect and atonement for previous sins.

As with most narratives about the past driven by “commemoration programmes” and contemporary political priorities, the current one is too selective. There is little doubt southern Irish governments after 1922 found it difficult to deal with the legacy of the war in the context of official commemoration. What was apparent from the beginning, however, was that they did not ignore the issue and indeed, particularly in the case of the first government of the State, went to considerable lengths to engage with it.

William T Cosgrave, for example, the leader of that government, responded with tact and intelligence to an invitation from British prime minister Stanley Baldwin in the autumn of 1926 to attend the unveiling of a memorial tablet in Westminster Abbey “to the memory of the One Million Dead of the British Empire who fell in the Great War”.

Cosgrave asked his Minister for Justice, Kevin O’Higgins, “to whom no similar objection exists”, to go to Westminster for the ceremony instead, which he did.

Cosgrave and O’Higgins were an interesting double act in all this; the following year, also unfortunately the year of his murder by members of the IRA, O’Higgins made a substantial contribution to a Dáil debate on the proposal to erect a war memorial at the park in Merrion Square.

riate location He felt this location, in the direct vicinity of

Government Buildings, was inappropriate as it would give “a wrong suggestion to the origins of this State . . . any intelligent visitor, not particularly versed in the history of the country, would be entitled to conclude that the origins of this State were connected with the lives that were lost in the Great War in France, Belgium, Gallipoli and so on. That is not the position . . . and I do not wish to see it suggested, in stone or otherwise, that it has that origin”.

Yet O’Higgins was adamant that he spoke “in no spirit of hostility to ex-servicemen” which was patently true; two of his brothers had served in the war and one of them, Michael, was killed in Flanders.

He expressed hope that “the memory of those men and their sacrifice, and the motives of their sacrifice will always have respect and reverence in Ireland”.

That memory was afforded respect from some quarters, but not from others, and there is little doubt the State’s current engagement with remembrance of the war is on a different level than previously, yet in some respects this is about a reviving of the sentiments expressed by O’Higgins rather than a new invention.

There does, however, appear to be much less clarity in relation to the contemporary attitude to “the origins of this State” as described by O’Higgins.

Aside from funds previously committed to capital projects, including a GPO interpretative centre, €4 million was allocated in this week’s budget for 1916 commemorations, but what such commemorations will involve remains a mystery.

In Dublin last weekend, 250 relatives of 1916 combatants gathered to complain that they had received no information on what was being planned. They are not the only people being kept in the dark: members of the Government-appointed expert advisory group on commemorations, myself included, have repeatedly asked for concrete information on what the plans are and we have been stonewalled. Either those plans do not exist, or they are an even bigger secret than were the plans for the Rising itself.