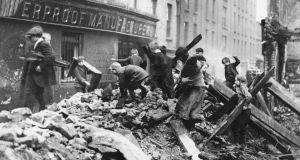 Children gather firewood from the remains of buildings destroyed in Dublin in the Easter Rising of 1916. Broadcaster Joe Duffy is to publish a book on children killed during the fighting. File photograph: Central Press/Getty Images

Broadcaster Joe Duffy is to publish a book on the children killed during the Easter Rising.

Duffy has been to the forefront in seeking to commemorate the lives of some 40 children who were killed during Easter Week 1916.

Until the last couple of years nobody knew how many children were killed by being caught up in the fighting during the Rising.

Duffy first got interested in the project while painting an Easter egg for the Jack and Jill Foundation. He decided to paint it with the names of the children killed in the Rising, but discovered it was difficult to ascertain an exact figure.

It struck him as odd that while the Proclamation speaks of “cherishing the children of the nation equally”, the child victims of the Rising had been forgotten about.

Children of the Rising will be published in the autumn of this year. Duffy said the stories of the children who died during the 1916 Rising “remains untold to this day.

“I am very pleased to shine some light on their short lives, in the context of an intense period in Irish history when Dublin was the single most dangerous place in the world for young people.”

Two two-year-olds were killed on Easter Monday morning when the fighting began. John Francis Foster was shot through the head as he lay in his pram during a firefight between rebels and British soldiers at North King Street, while Christina Caffrey died from a bullet wound outside her home at Corporation Buildings on Foley Street in the north inner city.

The new GPO Interpretative Centre, which will be a showpiece of the commemorations, will include a garden memorial dedicated to the children killed in the Rising.

Politicans who are members of the All-Party Group on commemorations were told on Wednesday that preparations for the Rising centenary are on course.

TDs and senators were briefed by the Minister for Arts, Heritage and the Gaeltacht Heather Humphreys on the latest developments.

Ms Humphreys said the seven capital projects costing €22 million will all be finished on time.

They are the GPO, Pearse’s Cottage in Ros Muc, Galway, Kilmainham Courthouse, the National Concert Hall, the Military Archives, the Tenement Museum and Richmond Barracks.

She said a “huge amount of ideas” had been received since the consultation process began in November and the Department had received an “enthusiastic response” from local authorities.

However, Senator Mark Daly, a member of the all-party group, said each local authority is only being allocated €31,000 this year to prepare for the Easter Rising commemorations next year.

Senator Mark Daly said the money allocated was “simply not enough to have anything close to the appropriate commemoration that the people of Ireland would expect”.

The Government allocated €4 million this year for preparations associated with the Easter Rising commemorations in 2016.

Senator Daly said there is not enough money at present for any other commemoration ideas. He also said the OPW has failed to date to provide a business plan as how to Kilmainham Courthouse will operate.