Intelligence, will power and skill: Depicting homemaking in 1944 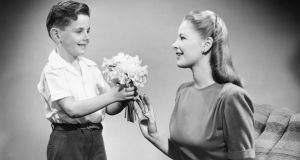 ‘Not every woman is a born mother, although Irishwomen, as a race, have the reputation for being so’, Barbara Dickinson wrote in 1944.

In 1958, an unusual story appeared in this newspaper outlining how Bishop Dibelius, the head of what was then West Germany’s Evangelical Church, asked German men to stop “turning Ascension Day” into “Father’s Day”.

Father’s Day was described as “a day of escape from the womenfolk”, and according to the German bishop featured “the holding of bibulous male parties” in Germany, which was, in the bishop’s eyes, a “tasteless practice”.

Father’s Day antics in Germany were described in the newspaper as thus: “Groups go in search of inns with good beer and food where they play cards and skittles without fear of female intrusion. Some hire brewers’ drays for a day’s drive in the country, instal a barrel of beer and carry placards such as ‘Freedom from mother.’ ”

The following year, a report on a social study conference in the Franciscan College, Gormanstown, Co Meath, appeared under the headline “Home-making sets social problem. Setting up of advisory services suggested”. Speaking at the conference, Maire O’Connell, a “domestic instructress”, stressed the importance of women’s education.

“We should examine whether it was at present directed towards developing woman’s special powers of mind, and soul, her distinctively feminine qualities; whether it prepared her to be a mature woman, wife and mother and where the art of home-making fitted into this picture,” the report read.

Home-making was depicted as demanding intelligence, will power and skill, a sense of “real values”, planning and organisation and cookery. Mona Honohan, described as a “housewife”, “said that it was surprising how often the upbringing of the family was left to one parent – usually the mother.

The father, out at work all day, golfing at the weekend, involved in societies and outside activities which demanded his presence at frequent meetings – how could he be au courant with the growth and development, the needs and aspirations of his children?”

The article expanded on Honohan’s discourse, “The past two decades, or so, had brought many changes in social habits which might have disastrous effects on family life and the happiness and security of the home. One of the more disturbing of these changes was that a surprising number of people expected to continue to spend their leisure time after marriage in the same way as they did before regardless of what responsibilities there might be at home.

“It seemed that if these people would try sitting at home more frequently they would find, after the initial shock had worn off, that they were beginning to enjoy the ‘feel’ of home.”

In 1955, an article by Elizabeth Chetwynd indicated how Mother’s Day was becoming mainstream again, “It is in appreciation of all the unselfish service which love in action means that the great worldwide movement known as the Mother’s Union, numbering over 500,000 mothers, sought to revive the age-old festival of Mothering Sunday.”

Mothering Sunday was traditionally celebrated on the fourth Sunday in Lent, the day both Church of Ireland and Catholic churches hear the same gospel, that of the loaves and fishes.

“In the early days of the Church it was the only day in Lent in which feasting was allowed. The festival took the form of a great family gathering. Sons and daughters working away from home were always granted a holiday to join their families in their homes.”

An aspect of the early Mothering Sunday was the baking of a simnel cake, a light fruitcake with decorative marzipan eggs. When the cake was cut, each member of the family presented their mother with spring flowers or fruit. The Mothers’ Union, founded by Mary Sumner in 1876, is a Christian charity that still continues today.

“Not every woman is a born mother, although Irishwomen, as a race, have the reputation for being so,” Barbara Dickson wrote in the newspaper in 1944, in an article expanding on a suggestion made in Scotland that parents should get some kind of lessons in raising children.

Dickson mused about what some of those lessons could be, “every mother has a different kind of child or children, and hard and fast rules will not apply to them all. Say the first class deals with persuasion, as opposed to corporal punishment.

“Mrs A has a son to whom the hairbrush is the only argument he understands, and Mrs A knows this better than her teacher. Mrs B’s daughter, on the other hand, can be cajoled into anything, and Mrs C has two youngsters who appear to react to either method equally well. What are all these mothers to do?”

You’d need a day off just thinking about it.