Modern mathematical techniques, utilised by researchers at the Coventry, Oxford and Sheffield Universities, have helped shed new light on sagas going back centuries, such as the Battle of Clontarf in 1014. Video: Coventry University 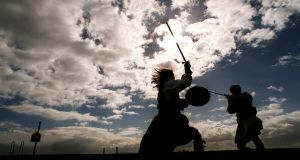 A re-enactment of the Battle of Clontarf carried out in Dublin. File photograph: Frank Miller/The Irish Times

Modern mathematical techniques – similar to those used to analyse social-networking websites – have shed new light on a centuries old debate about the famous Battle of Clontarf of 1014.

Brian Boru’s victory is widely recognised for breaking the Viking power grip in Ireland – a view to be found in most Irish school history books.

Some academics dispute this traditional view, insisting it was a domestic feud or civil war instead of an international conflict. The debate has carried on for the past 250 years.

Revisionists are of the view was a conflict in which Munster and its allies were victorious over Leinster and Dublin – with Viking warriors on each side. Medieval texts have been used by both sides to support their cases.

Researchers at Coventry, Oxford and Sheffield Universities have, however, analysed the most extensive of these medieval texts using a mathematical approach similar to that used to analyse connections between people on social networking websites, such as Facebook.

Prof Ralph Kenna, who is originally from Athlone, led the interdisciplinary team who evaluated the text. “Our analysis of the topic is unique because it involves mathematics and social networks,” he told The Irish Times.

Their analysis is of the medieval text Cogadh Gáedhel re Gallaibh (The War of the Gaedhil with the Gaill, ie invasions of Ireland by the Danes and other Norsemen), outlining how an army under the leadership of Boru challenged Viking invaders and their allies in Ireland, culminating with the battle of Clontarf.

Their findings, published on Wednesday in the journal Royal Society Open Science, support the popular view that the Battle of Clontarf “was the climax of a war mainly between the Irish and Vikings”.

To perform the study, they analysed how all the Irish and Viking characters in the text fit together in a network, monitoring whether interactions between them were benign or hostile. They developed a mathematical measure to quantify whether hostility in the network mainly connected Irish to Irish or Irish to Vikings.

They then calculated the difference between the measure of hostilities between each type of character (Irish and Viking) and what would have been hostile interactions in the network, indiscriminate of whether characters were Irish or Viking.

A positive value of the resulting measure would signal an Irish civil war and a negative number would reflect an Irish versus Viking conflict. “The results gave an overall negative value, suggesting that the text mainly describes an Irish against Viking conflict,” Prof Kenna said.

However, because the negative value was moderate they suggest the text does not describe a fully “clear-cut” Irish vs Viking conflict. “Instead, the network portrays a complex picture of relationships and social networks of the time.”

“Every schoolchild in Ireland is taught about the battle of Clontarf; it’s an iconic event in our country’s history. We’ve used network science to give a greater understanding of medieval accounts and to give new insight into the relationships and hostilities from this period,” added Prof Kenna, who is a theoretical physicist at Coventry University.

Their research was prompted by the academic debate which was especially to the fore in 2014, the millennium commemoration of the battle – this is the fourth major text that his team has analysed.

“The medieval composer of the [Irish] text certainly did not think in terms of social networks but, in recording a cast of hundreds with well over a thousand connections between them, he imprinted them into the narrative,” he explained.

“This is why the networks approach delivers unique new insights; it extracts an unintended message. The paper goes beyond previous works in that it generates a new quantitative element to the complexity and conflicts of a long-standing debate about the Viking age in Ireland.”

PhD student Joseph Yose, who was involved in analysing the data, said there were no detailed independent historical records of the time and the data comes from a skilfully written medieval text “replete with bias, exaggerating virtues and vices of many of its characters”.

“Our statistical analysis delivers aggregate characteristics, largely insensitive to such individual and rhetorical elements. While it cannot decisively resolve the debate, we hope it delivers useful statistical information on the Viking Age in Ireland,” he added.