Winter solstice at Newgrange broadcast live around the world

Shaft of light enters 5,000-year-old tomb at sunrise, if skies are clear 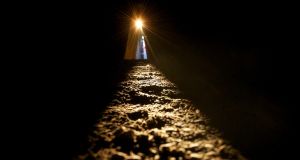 The sun shines along the passage floor into the inner chamber at newgrange during the 2013 Winter Solstice at Newgrange. Photograph: Alan Betson

Hundreds of people will gather at Newgrange, Co Meath on Thursday morning as the ancient chamber is illuminated at sunrise on the winter solstice, the shortest day of the year.

Thousands more are watching the phenomenon as it is streamed online for the first time. Access to the 5,000-year-old passage tomb is strictly limited and only accessed each year on December 21st by a small number of people selected in a lottery system run by the Office of Public Works (OPW).

Newgrange’s alignment captures the rising sun during the winter solstice period around December 21st. If skies are clear during sunrises from December 19th to 23rd, a narrow beam of light penetrates its “roof-box”, reaches the chamber floor and extends gradually to illuminate the entire chamber over 1 7-minute period – marking new life at the turn of the year when the days slowly begin to get longer.

The live stream is taking place on Wednesday morning from 8.30am and on the morning of the winter solstice itself, which is Thursday, from 8.30am.

View a gallery of images from last year here.

The “roof box” is located roughly 2.5m from the entrance, with an orange glow reflecting off the structure’s stone surfaces to highlight the spirals, triangles, concentric circles and arcs carved to decorate the tomb thousands of years ago.

The monument’s solar alignment, first documented in 1967 by archaeologist Michael J O’Kelly, is now an established part of the Christmas calendar.

For more than 4,000 years, Newgrange lay hidden from the world until Scottish landowner Charles Campbell, who had inherited the land after the Battle of the Boyne, sent his labourers out looking for building stone in 1699. They uncovered the site, thinking at first it was a cave.

The purpose of passage tombs such as Newgrange, and its sister sites in nearby Knowth and Dowth, is still debated. The Neolithic era stretches from 10,000 BC to 2,000 BC, and is marked by the introduction of farming.

Controversy erupted last year when a former State archaeologist claimed the trapping of the winter solstice sun at Newgrange was not a 5,000-year-old phenomenon, but a 50-year-old “construct”.

Michael Gibbons, co-author of a paper on the subject, argued our Stone Age ancestors were not as clever as we thought, and the significance of Newgrange as a “Hiberno-Roman” cult site in the late Iron Age had been deliberately underplayed. His theory, of course, was disputed.